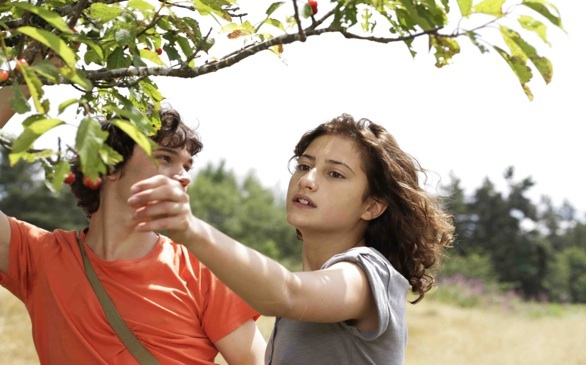 The film centers around Camille (Lola Créton), a teenager at the start of the film, who is madly in love with the slightly older Sullivan (Sebastian Urzendowsky). Their love is intense, and her love for him borders on obsessive.

When Sullivan leaves on a backpacking trip through South America, Camille is devastated. Though they communicate through letters, the distance takes a toll on their relationship, and Sullivan eventually calls it off. Unable to cope with her heartbreak, Camille attempts to commit suicide.

The movie then jumps a few years forward. Camille is now an architecture student, beginning a relationship with her professor, Lorenz (Magne-Havard Brekke). He is much older than she is, but he begins to fill the void Sullivan left behind.

Of course, just when Camille is finally getting her life together, Sullivan once again enters the picture. This time, though, Camille is older and more mature. But can you ever escape the feelings you have for your first love?

While the central theme of a first love is played out well throughout the film, Camille’s character is so unlikable that it is sometimes hard to watch. Créton plays her well, and the audience is able to feel empathy for her when they see how upset she is about Sullivan, but despite Créton’s excellent portrayal, Camille comes off very needy and whiny and it is hard to root for her.

I had a hard time understanding why Sullivan put up with her constant need for affirmation when they dated, and why Lorenz wanted to date her later.

One thing that helped the movie, though, was the beautiful landscape. In movies set in Paris, as Goodbye First Love was, it is hard not to picture yourself enjoying living in the same cottages or swimmig in the stream that the characters do.

The symbolism the film uses is also very effective. For example, Sullivan is always seen on a bike, showing his youth and the young love he shared with Camille. Lorenz, on the other hand, seems very career-oriented, showing his maturity.

If you can get past your disdain for Camille, you will leave Goodbye First Love with the message that your first love is intense, and it never really leaves you until you grow to the point where you are the one who chooses to let go of it –something we all can relate to.