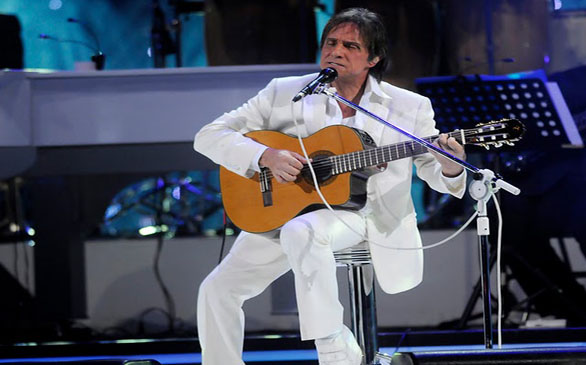 Ahhhhhh, Brazil. Perhaps South America's most beautiful nation, it's the home of music sensation and legend Roberto Carlos, known as the King of Latin Music.

Carlos, who sings in Portuguese, Spanish, English, Italian and French, is coming to perform for one night only in Downtown's Nokia Theatre at L.A. Live. He's sure to bring with him Brazil's exotic flare, outstanding joy and tropical hype, along with his own impressive musical repertoire for a show that is sure to please.

Whether old or new to his fan base, Carlos (a Grammy award winner) will surely leave you in awe and very well entertained. His humble charisma on stage while performing has lifted his image to that of an angel, even a god, when it comes to music that features MPB, rock 'n' roll, bossa nova, soul and funk - all of which he combines in prolific fashion.

Carlos's remarkable tunes have left all of us speechless throughout the years. An obvious example is "Lady Laura," a track dedicated to his mother, because of the soothing sounds and profound message in the lyrics. Another one of his greats is "Jesus Cristo," a tribute to Jesus Christ, which is upbeat in tempo and meaningfully touching.

"Amigo" (Friend), which he wrote for his best friend, is Carlos's most popular song. Made famous since its release during the late 1970s, "Amigo" reached the top of the charts throughout the world. With chart-toppoers like these, it's no wonder the singer -- known for wearing all white during his shows -- has sold over 120 million records globally.

Some of his other noteworthy tracks include "Un Gato En La Oscuridad" (A Cat In The Dark), "Camionero" (Truck Driver), "La Montaña" (The Mountain) and "Detalles" (Details). Most are romantic, and all are pure music to one's ears.

Carlos, who acted in movies at times, was heavily influenced by his idol Elvis Presley and the 1950s rock evolution. That inspiration led him to write "Jovem Guarda" (Young Guard), which resulted in rapid success. And here we are now, still talking, discussing, admiring, listening to and writing about this acclaimed singer and composer.

Roberto Carlos will perform at Nokia Theatre L.A. Live on Saturday, June 16, at 8 p.m. For more information about the show and to purchase tickets, click here.