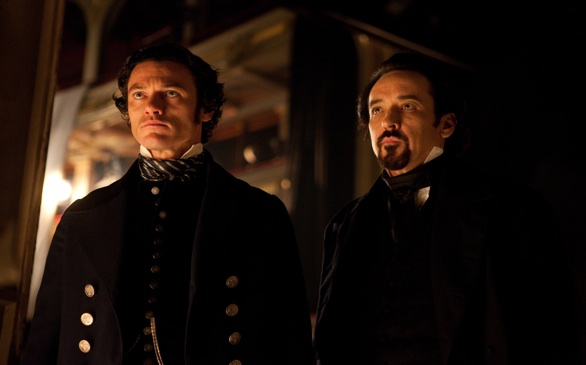 It has become a trend to create fictionalized accounts of various historical figures’ lives. This week, The Raven is following suit, giving viewers a glimpse into the last few days of famed prose and poetry writer Edgar Allan Poe. In no ways based on a true story, this mystery centers around a killer who takes murderous scenarios from Poe’s work and makes them a reality. After being found the prime suspect, Poe (John Cusack) and the detective (Luke Evans) assigned to the case team up to track down the killer before he strikes again.

This melodramatic tale on the surface looks promising, but doesn’t bring the richness of Poe’s true tales of terror. The combination of the murder mystery with the plot of Poe being in love with a woman of a higher class, Emily (Alice Eve), whose father forbids the relationship, is akin to a soap-opera plot at best. The weakness was definitely in the script. Overusing pieces of “The Raven” and “Annabel Lee” ruined the potential of good motifs by being out of place or just plain cheesy.

Edgar Allan Poe is no doubt rolling in his grave because of the added stanza to “Annabel Lee,” and just the mess the script made of his work. The killer could be easily discovered in the first few scenes, as the supposed “red herrings” offered had no true motivations to pass off as suspects.

It was at times difficult to see Cusack as Poe and not John Cusack. He did look remarkably like him, and if not for certain inflections of Cusack’s speech, it would have been easier to suspend reality. Luke Evans’s performance as Detective Fields ended up being one of the strongest performances in the film, while Alice Eve’s performance as Emily wasn’t quite memorable. You want the audience to care about the woman buried alive!

One positive thing to note is that director James McTeigue (V for Vendetta) did bring his signature style to the visual palette of the film. The composition of the murders and gore gave the film something worth sitting through, a slight distraction to the butchering of Poe’s work that was happening plot-wise.

Even hard-core Poe fans who tend to appreciate any incarnation of Poe’s work might not be able find something redeemable in this piece, which at best could be compared to poor fan-fiction. You’re better off sticking to the original written works and skipping this trip to the movies.