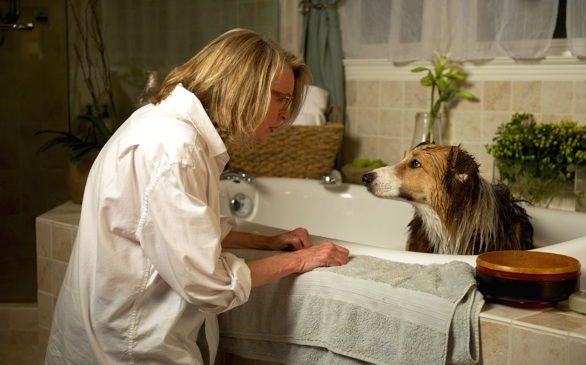 Darling Companion is, at best, a mixed bag of bad and mediocre: It’s bad because it plays out like a corny TV movie, and it only reaches the realm of mediocrity with the few very funny moments provided by the film’s overly talented and delightful cast.

Written and directed by Lawrence Kasdan, who counts Companion as the last bit of a trilogy also encompassing The Big Chill and Grand Canyon, the film doesn’t waste any time, diving right into a cheesy story and introducing most of the characters (many of whom you won’t remember) within the first few minutes.

The film begins when Beth (Diane Keaton) and daughter Grace (Elisabeth Moss) spot a bedraggled dog on the side of a snowy highway while driving home from the airport in Denver. The dog is standoffish at first, but warms up to the friendly duo, who put him in the back of the car and haul him to the vet. After an awkwardly flirty encounter between the doctor and Grace, Beth agrees to take the dog – who will aptly be named Freeway – home for a couple of days, until she can find him a permanent residence. Low and behold, with a surgeon husband (Kevin Kline) who is work-obsessed and two kids now out of the house, Beth ends up keeping the dog.

Before we know it, the film has fast-forwarded an entire year and we are at the wedding of Sam (the vet) and Grace at her parents’ vacation house in the Rockies. The ceremony starts and ends very quickly, albeit taking the time to showcase a nervous officiant, and then Sam and Grace are off on their honeymoon. When the excitement winds down, Joseph (Kline) takes Freeway out for a walk in the woods. The dog sees a deer and runs off; not too worried, Joseph heads back to the house and tells his wife, who nearly flips out at the loss of her companion.

When Freeway goes missing, the film turns a corner, now showcasing the talents of its actors as they band together to search for the missing dog. While a lot of the dialogue seems forced and some of the interactions are overly corny, there is no denying the fact that this is a quirky, funny, talented cast: Kline and Keaton are great sparring partners, and Richard Jenkins and Dianne Wiest as nearly-marrieds and soon-to-be pub owners, are hilarious.

All in all, Darling Companion is a bumpy ride that is saved somewhat by the laurels of the cast. And while the search for Freeway goes on way too long (seemingly endless in many parts), the length of the hunt at least gives the actors more time to warm up and find their niche.