The U.K.'s Ed Sheeran: On his new album and his tour with Snow Patrol 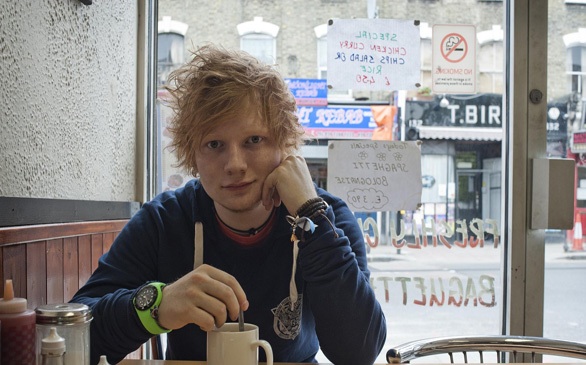 After establishing quite a fan base for himself, Ed Sheeran has become a pop sensation in the U.K.

Since 2005, Sheeran has worked tirelessly to build his music career. In 2009 alone he played 312 shows, which is practically unheard of. However, it wasn’t until he released his single “The A Team” that Sheeran gained commercial success, with the song debuting at No. 3 on the U.K. charts.

Now, he’s trying to make it big in the U.S. In late March, Sheeran embarked on a tour with Snow Patrol, a band that is more established stateside. Despite his busy schedule, he took the time to answer some of Campus Circle’s questions about the tour, his album, simply called +, and his plans for the future.

Campus Circle: How did the tour with Snow Patrol come about? Did they approach you to open for them?
Ed Sheeran: They actually slipped a note under my door when we both played in Switzerland with Lenny Kravitz. The note just said, “We love your album, come and have a drink with us,” so I went out for a drink, hung out, and they invited me on. They are lovely lads.

CC: How receptive do you think listeners in the U.S. have been to your music?
ES: So far everyone has been positive; I’m really enjoying working from the ground up again here in the States. I love meeting all the new fans.

CC: When you came to L.A. for the first time, what were your first impressions? Why did you decide to come to the U.S. in the first place?
ES: Well, I decided to come just to try out the acoustic scene over here, because I’ve heard that it produces some amazing music, and it’s very similar to the scene in England in the acoustic scene sense. My first impression of L.A. was that if you can’t drive, you’re pretty screwed. And, well, I can’t drive so…

CC: In your video for "Lego House," Rupert Grint is featured quite prominently. How did that collaboration happen?
ES: People have always said that I looked like him (mainly because of my hair), and Tom Felton, who is in the Potter films, got in touch with me to say he liked my tunes. So we just kept in touch. I had an idea to get Rupert to play me in the video, and got Tom to contact Rupert and ask him, and he thankfully he agreed. He’s a really cool guy.

CC: What is the difference between U.K. audiences and U.S. audiences at a concert?
ES: There really is no difference. Everyone’s just as enthusiastic. The different regions differ in how they take in music; some are quiet, and some are mental. It’s just fun to play to all crowds.

CC: When you're writing songs, are there any particular locations that you find inspiring? Anywhere you like to go to write?
ES: Usually I write in the studio, but I’ve written songs in the weirdest of places. I wrote a large section of a song called “Firefly” on a tube [subway] at around 11 p.m. when no one was on the train.

CC: Was singing a childhood dream of yours? Or was it something that just happened to work out when you got older?
ES: I think that every kid wants to be a rockstar at some point in their life, I guess, but I actually wanted to be a painter when I was younger, and then through time I just developed a passion for playing guitar and singing, and it all worked out from there.

CC: If you weren’t where you are today, releasing albums and playing concerts for fans, what is it that you think you would be doing?
ES: I hope I’d be doing something to do with music, maybe working within the industry if I couldn’t play. If not, maybe working in a supermarket.

CC: How many shows will you be playing with Snow Patrol?
ES: I believe there are a total of 33 shows on this tour.

CC: What are your plans after the tour with Snow Patrol ends?
ES: Coming back for my own tour here, releasing my album + on June 12, and doing it all again!

CC: Tell me about +.
ES: + is the culmination of five years of hard work performing and writing these songs. It captures where I was at that specific time, and I’m extremely proud of it.

CC: Anything else to add about your album, youth, current experiences in the industry, etc.?
ES: The best thing for any new artist is to remember that you are making a living by making people happy, so work as hard as you can, be nice to everyone and enjoy the ride. And I am definitely enjoying the ride.

Ed Sheeran will be opening for Snow Patrol when they play May 8 at the Hollywood Palladium, 6215 Sunset Blvd., Los Angeles. Tickets are $35 and are available here.