Stroy of the Year: Determined to be its Own Band 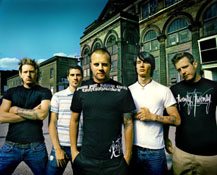 "Labels are labels, you’re always going to have them no matter who you are," says Story of the Year drummer Josh Wills. And if ever there was an authority on stigmatization, it would be the St. Louis five-piece Wills is a part of. With the band’s new album (In the Wake of Determination), however, he and his bandmates are out to defy that statute in the mainstream rock rulebook.

"We’re determined to be our own band and make the music that we want to make," says Wills. "We were determined to not make a pop record," he adds, keenly aware of how Story’s last album (2003’s Page Avenue) was received and categorized, as well as of what many critics are expecting for the band’s sophomore effort. True to form though, the band is giving a big middle finger to any and all preconceived notions.

"On our first single, the verses sound like Metallica," says Wills of the track "We Don’t Care Anymore," a far cry from the band’s formerly comparable contemporaries the Used, Taking Back Sunday, or any number of so-called screamo bands. "I don’t even know what screamo means," he chides.

Moreover, past associations are really just inconsequential at this point. With an album that showcases the eclectic and varied tastes of five very stylistically different musicians, Story is completely over that whole "defining itself" thing. Citing Pantera and Zeppelin to Dre and Outkast, Wills gives a small taste of what influences fans can expect to hear on Determination. "We all like so many different things; it’s not like we just listen to the music we write," he adds.

Wills is quick to also point out that such an accomplished album didn’t come without work. Telling one example of how the band’s members worked to exhaustion while writing the album, he says: "Ryan [Phillips, guitar] worked his ass off. He slept maybe four hours a night. He would write a song all night after we practiced, then fall asleep for two hours, wake up and we’d be at his house ready to play again. It was just every day for about two months."

Proof that hard work does in fact pay off, Wills is confident this album will do his band more justice. "We went into this record not wanting to make the overly produced record we’d made before," he says. "We wanted to capture the live show on record and we’re all really happy with what came out. We’re so happy with it that we don’t really care what anyone else thinks. We all love this music and we all love playing it and that’s all that really matters."

Though unfazed by criticism, Story of the Year is still very intent on winning kids over when it performs and the band’s signature stage antics have yet to be lost. "Our goal is that we have fun and to make sure the crowd has fun," Wills says. "Half the time we play like shit because we’re doing stupid shit. I’ve seen Ryan and Adam cut the strings off each other’s guitars in the middle of a show. Kids are paying to see a show and we’re trying to give it to them."

"Ryan will run down and scream in someone’s face … I wouldn’t like that when I was little. Two days later, I’d be like, ‘That was awesome!’ but at the time I’d be like, ‘Whoa, what just happened?’" Wills says, feigning a frightened expression for effect. "We’re just trying to make people walk away and go, ‘That was the best show we’ve ever seen.’"

Catch the band members offstage however, and you will see a very different side to all of them. "We’re not your typical rock band. We’re extremely boring," Wills jokes. "Most people think after the show there’s parties and chicks everywhere, it’s not like that. We sit on the bus and watch TV and Phil plays ‘Halo’ 24-7."

Short of a few minor venue security run-ins and the occasional conflict with other, far less talented bands, it’s been a decently smooth ride for the members of Story of the Year. "We’re all pacifists, we try to avoid confrontation unless necessary. There are times when it’s necessary, when people think they’re too cool for school," says Wills, adding after a pause, "that’s why we surround ourselves with large crew members."

Just as the tracks on Determination will tell you, Story of the Year really doesn’t care anymore what the naysayers think and neither should the rest of us, because this story speaks for itself.

In the Wake of Determination is currently available. For more information, visit www.storyoftheyear.net.