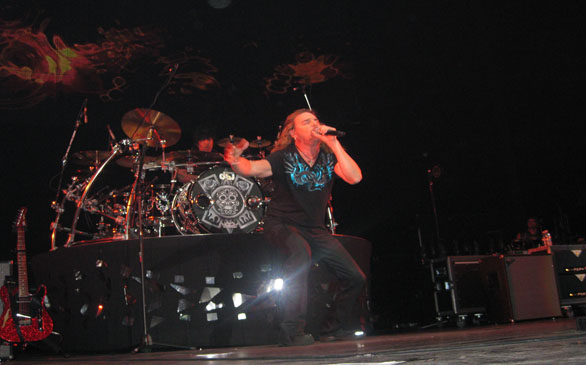 Mexican rock band Maná keeps getting better with age, evident at their most recent concert at the Staples Center in Los Angeles, where they now hold a record for the most concerts (nine) performed by any artist. They will soon be breaking their own record when they perform their 11th show on April 25, which is rumored to be sold out as well.

Over the years, Maná, a multi-Grammy Award-winning group, have had enormous success throughout the world. And they demonstrated why that is during Thursday night's epic music display. They are authentic, humble and stay true to their roots.

The crowd, which featured a diverse sampling of ethnicities, anxiously awaited the start of the show. As soon as Maná made their way to the stage, the audience became electrified straight through to the finale of the over-two-hour concert.

Maná opened with "Oye Mi Amor" (Listen My Love), a perfect track that came as a pleasant surprise to many. "Oye Mi Amor" is a fabulous, upbeat tempo song with fun and romantic lyrics propelling one's body to dance and joyfully jump instantly. This track never gets old. In fact, it seems as if it is fresh as it was in its release in the early '90s.

Several hit songs followed before a unique collaboration featuring Spanish singer Enrique Bunbury. Together, they sang "El Dragón" (The Dragon), a rather eclectic smoothing rock portrayal. At times intense, "El Dragón" penetrated everyone's soul - evident by each person's fiery attitude during and after it was performed.

Soon, two favorites came in "Bendita Tu Luz" (Blessed Is Your Light) and "Mariposa Traicionera" (Treacherous Butterfly). Both are very tropical in rhythm, particularly "Bendita Tu Luz," due to its bachata foundation. Originally, it is a song that featured the legendary Dominican singer Juan Luis Guerra.

With a combination of classy and fresh melodies, Maná conquered L.A. yet again. If they continue to stay true to their roots and maintain the originality they have shown throughout their musical career, the band will not only retain its current fan base but will also attract many new fanatics.