Coheed and Cambria: Conquering One Galaxy at a Time 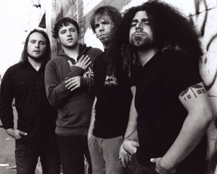 Trying to simplify into a few words, even into a few sentences, what Coheed and Cambria is about is like trying to determine how many stars are in the sky, where the universe begins and ends, or what came first, the chicken or the egg.

That’s because there are so many questions left unanswered. For example, how is it possible for a band to blend so many different styles and genres of music and still create something so easy on the ears? And how exactly does a saga based around a doomed married couple who are convinced they must sacrifice their children in order to save the world from being infected by a virus that is embedded in their genes make for good music? More importantly, why are these things working for the band?

Ultimately, it’s the mystery and suspense that’s continuing to turn heads and causing people to search for a deeper understanding of the band and its music.

But to understand Coheed and Cambria is to understand that some things are better left to personal interpretation and imagination.

"There are two categories of people that listen to our music, those who are into the science fiction, comic book aspect of us, and those who like the way our music sounds," guitarist Travis Stever says. "Either way, people can take what they want out of our music and decide for themselves what our music means to them; we are giving them the choice."

Finding alternative meanings to the music is exactly what each member of Coheed and Cambria has found within himself.

While Claudio Sanchez, frontman and mastermind behind the sci-fi tale, has found a way to relate his love for comic books to music, the band’s other members – Stever, Michael Todd (bass) and Josh Eppard (drums) – are able to create music they aren’t finding anywhere else.

"We all come from the same common ground and all grew up listening to classis rock," Stever says. "We may have originally been influenced by different styles or had different ideas of what this band would be or sound like, but we all share the same dream and we are living that dream together."

Sometime around 1995 in upstate New York, Sanchez began a side project called Shabutie. It was in this band that the characters Coheed and Cambria were born.

Stever, who entered the band fairly late in the game, says the music made by Shabutie is impossible to explain. "It was a mix of all the different styles of music that we were into," he says. "The problem was that no one really wanted to listen to us."

However, since releasing its first album, The Second Stage Turbine Blade, as Coheed and Cambria, people have been listening to its music with open ears – loving, praising and trying to grasp an understanding for the band.

With the band’s third release, Good Apollo, I’m Burning Star IV, Volume One: Fear Through the Eyes of Madness, Coheed and Cambria combines multi-faceted and dynamic music with a story that continues to be confusing.

Good Apollo gives the listener a chance to step outside of the story and see it from the writer’s perspective; to see how events in his life will affect the outcome of the story and how the worlds of the writer and the story’s characters collide. In an attempt to clarify this intergalactic odyssey Sanchez has created, he recently released a line of graphic novels to go along with each one of the band’s albums that will likely increase people’s fascination with the music.

As long as Coheed and Cambria continues to sell records, sell out venues and keep people intrigued by the mystery it alludes, the band will be able to continue to pursue its dreams.

But if for some reason it all ends tomorrow, Stever says he and the rest of the band will be fine with it. "When we started we didn’t even know if anyone would like what we were doing," he says. "At least we had the opportunity to live out our dream and we’re able say, ‘Wow, I got to do that."

Good Apollo, I’m Burning Star IV, Volume One: From Fear Through the Eyes of Madness is currently available. Coheed and Cambria will play the Wiltern LG on Oct. 16. For more information, visit www.coheedandcambria.com.