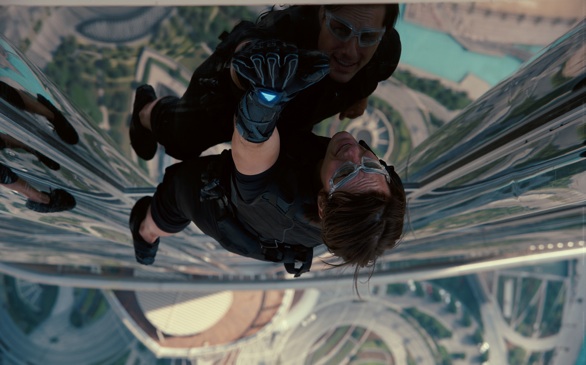 The Majors: Tom Cruise reinvigorates his signature franchise (and just possibly his career) with Mission: Impossible - Ghost Protocol. This newest installment finds super agent Ethan Hunt and his crack team disavowed by the government, on a mission to clear their names and save the world from nuclear war.

A reformed smuggler (Mark Wahlberg) is forced to take on one last job to repay the drug kingpin (Giovanni Ribisi) threatening his family in the action flick Contraband.

The Idiotbox: “The Wire” creator David Simon brings all the human drama and rich cultural history of the Big Easy to life in HBO’s “Treme:” Season 2. Set in the aftermath of Katrina, the series follows a diverse ensemble of characters as they try to rebuild their lives amidst tragedy.

Seth MacFarlane’s other series, “American Dad,” marks its 100th episode with Volume 7. The animated comedy follows a gung-ho CIA agent and his off-kilter family, which includes an alcoholic alien and a German goldfish.

Gear up for the Johnny Depp/Tim Burton remake by revisiting some of the highlights from the original “Dark Shadows” TV series. The “Best of Barnabas” and “Fan Favorites” collections cover the essentials from the gothic vampire familial saga.

The Horror! The Horror!: Return to the world of Pagan Scotland in The Wicker Tree, a thriller from the writer-director of the original cult classic The Wicker Man.

Stranger than Fiction: The Flaw investigates the root causes of the economic meltdown, searching for a solution to income inequality before the next crisis. The Sundance doc is a dramatic and accessible primer on dry economic concepts.

From the Vault: Set to the sounds of the ‘70s R&B scene, Andrew Davis (The Fugitive) crafted a personal story of life on the South Side of Chicago in Stony Island. The film follows the only white kid on the block (Richie Davis) as he tries to form a band with his best friend (Stoney Robinson). It’s a great time capsule, chock full of groovy music and gritty locations.

Under the Radar: Lisa Cardellini and Michael Shannon star in the affecting drama Return, a modern-day take on Coming Home. Kelli (Cardellini) returns from service in Iraq to her husband (Shannon) and children, but struggles to restart her old life after the horrors of war.

Dennis Farina gives a career performance as a small-time hustler forced to confront the emptiness of his life in The Last Rites of Joe May.

Blu Notes: A throwback to old school horror, Ti West’s The Innkeepers, set in an old hotel, builds tension with creepy atmosphere rather than relying on gore or cheap scares.

Richard Harris and Vanessa Redgrave star in Camelot, the classic Oscar-winning musical adaptation of the King Arthur legend. This edition includes a photobook, a new featurette and a soundtrack sampler.

The comedy duo of Bud Abbott and Lou Costello made the jump to feature films with the classic Buck Privates, about two con artists who find themselves in the army.