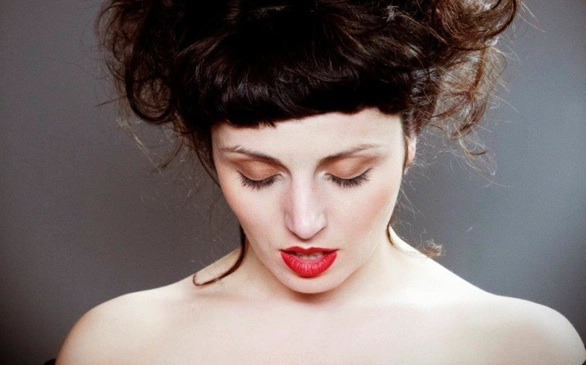 PUSHERJONES: “COUNT ME OUT”
Move over Gorillaz; here comes PusherJones, a virtual band whose members include Dave Kushner of Velvet Revolver, Franky Perez of Scars on Broadway, Joey Castillo of Queens of the Stone Age, Scott Shriner of Weezer and rhythm guitar player Dave Warren, who also happens to be the creative director of the animated TV series “The Simpsons.” The idea for the band came from Kushner and Warren, who initially likened the imaginary band to a mash-up of the Gorillaz and Guns N’ Roses. But now things have gone much further; coming soon will be the PusherJones animated TV series and a music video, and probably Gorillaz-style concert appearances. For now, the PusherJones debut “Count Me Out” drops on May 1 as a stand-alone single and as a cut on Avengers Assemble, the soundtrack to The Avengers.

CARINA ROUND: TIGERMENDING
Fans of British singer Carina Round have been waiting five long years for the eclectic artist to put out new music; now the wait is ending with the May 1 release of the oddly-named Tigermending. Currently living in Los Angeles, Round says she’s found lots of inspiration on the local scene. “Making my home in the creative circus of Los Angeles has allowed me the profound opportunity to develop a loving and supportive community of brilliant musicians, artists, photographers, videographers and other collaborators. I’ve been fortunate to work with and learn from some of my favorite artists old and new, which has opened me up to new roads of expression.” Guesting on Tigermending are Brian Eno, Billy Corgan and Dave Stewart.

THE PARLOTONES: JOURNEY THROUGH THE SHADOWS
Fans of the Parlotones will be happy to know that the South African band has a new release called Journey Through the Shadows dropping on May 8. The Parlotones enjoy being the biggest rock band in South Africa, and they get more popular Stateside with each new release and tour. But lead singer Kahn Morbee explains that the band knows they have lots of work to do before they can say they’ve conquered the States. “America dictates trends around the world,” says Morbee. “If you’re big there the rest of the world listens. It has a ripple effect. We would be very proud to achieve success in the U.S. because very few artists from our country have managed it. It would be nice to have a success story, especially in a nation that needs uplifting, and instill folks back home with a ‘can do’ belief.” The Parlotones play the Roxy on May 17.

HALF NOTES
L.A. electronic pop-art duo Hecuba will release a new album called Modern on May 8, the same day they play a show at the Echo. Katie Herzig is touring behind her recent release, The Waking Sleep, and she’ll also be performing at the Troubadour on May 1. German metal band Holy Moses has announced a May 22 release date for 30th Anniversary – In the Power of Now, a set that will feature re-recorded versions of their catalog material. Holy Moses is also giving away an autographed snare drum skin; for your chance to win visit their official Facebook by May 31. Want a free copy of Prologue, the new release from the Milk Carton Kids? Grab yours here.