Diamond Dispatch: Magic Happens, the Beginning of the End 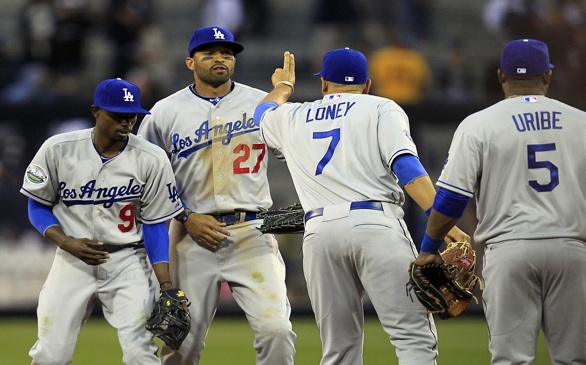 Remember when there was all that talk about some guy named Pujols and that team down in Anaheim that supposedly was going to redefine Major League Baseball in Southern California? Yeah, neither do I. Funny game, baseball. In just a few short weeks the conversation has taken a startling turn.

The many volumes of spring training speculation is but a faint memory as the new season has given L.A. baseball fans plenty of surprises. Who would have guessed, for example, that the Dodgers would spring to their best start since 1955, the year they won their first World Championship? That they would in fact be competing for the best record in the league with the Washington Nationals, a team that has never once finished above .500 at season’s end? Who could have guessed that three weeks into the season, the great Albert Pujols would be without a single homerun and the Angels of Orange County would be struggling to get out of last place?

Here’s another surprise: that offseason acquisition pitcher Aaron Harang in just his second start of the season would set the all-time Dodger record by striking out nine consecutive batters. Not Koufax, not Drysdale, not Sutton, Valenzuela or Hershiser. Harang. A couple of days later, the Dodgers would turn their first triple play in 14 years. And talking about records, Matt Kemp, the da Vinci of this Dodger renaissance, would become the fastest ever to hit nine homeruns in just the first 15 games. At this rate, he’ll breach 100 homers for the year. Not bad for a guy who hit just .270 in spring training.

Oh, but that was so long ago. And the baseball season is oh-so-long. For all the fun Dodger fans may be having, the sober-minded person knows it is early. They may also take into account that the Dodgers have achieved these mighty feats against teams like the Padres, Pirates and Astros, all of whom finished at least 20 games under .500 last season.

Still, it is fun to imagine that the announcement of the team’s sale to an ownership including Laker great and real estate developer Magic Johnson brought an instant bit of magic with it. In no time there will be new Kirk Gibson homers and Fernandomanias. Everything fans knew and loved will come back as though it never went away.

Ah, but the world has changed. This is not your father’s family-owned ballclub nuzzled neatly into the Chavez Ravine. This is the $2.15 billion Guggenheim Baseball Management (GBM) club, and the Ravine is a parking lot jointly owned by Frank McCourt and GBM. All the delight which on-the-field play has provided in recent weeks, even the relief at knowing McCourt will soon no longer have his name attached to the stadium, does not hide the stench of big business emanating from “Dodgertown.” How on Earth does GBM intend on making a profit off the ball club? There are only two reasonable answers: television and development.

On April 14, all fans in attendance were given a palm-sized replica of Dodger Stadium in honor of the park’s 50th anniversary, fun to hold in one’s hand and to think fondly of the many good times you may have enjoyed at what has become a landmark. You might pretend for a moment that the stadium is your own as you gaze over the panoramic vistas, from the skyscrapers of Downtown to the Hollywood Hills to the Pacific Ocean. Now imagine you’re a filthy rich investor whose just bought 300 acres of prime L.A. real estate for $2.15 billion. What do you do?

Dodger fans, enjoy it while it lasts.