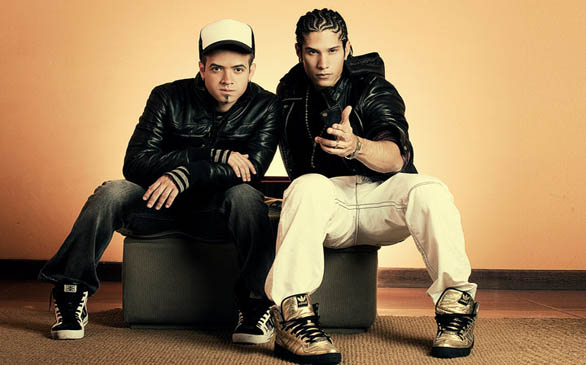 Chino & Nacho are scheduled to perform at Club Nokia on May 11th.
(Credit: Facebook/Chino & Nacho)

Once in a while, a music duo arrives and makes such a big splash that they reach rapid stardom in a second. Urban contemporary duo Chino & Nacho have captured such a feat in a distinctive form.

Natives of Venezuela, Chino & Nacho consists of Jesús Miranda, better known as Chino, and Miguel Mendoza, known as Nacho. As soon as they became a duo in 2007, they formulated a fusion of pop, reggaeton and merengue. Their music is tropically urban and contemporary indeed, but the romantic lyrical blends provide a meaningful element that distinguishes their music from others.

Winners of a Latin Grammy in 2010, Chino & Nacho have four album releases under their creative belt. In 2008, Época de Reyes (Season of Kings) included collaborations with Don Omar and Divino, both of whom are popular reggaeton singers. But it was not until 2010's Mi Niña Bonita (My Beautiful Girl) and Mi Niña Bonita: Reloaded that the duo attained global recognition.

Mi Niña Bonita features the infectious self-titled track, an up-tempo romantic piece that captivates nearly everyone who listens to it. With "Mi Niña Bonita," Chino & Nacho gained enormous popularity, even in the U.S. Their follow-up album, Reloaded, is a re-edition but with a new track, the wonderful "Tu Angelito" (Your Angel). With its fast rhythmic sound, the song enamours with its romanticism.

Although both of these melodies are already crowd favorites, Chino & Nacho's latest release Supremo (Supreme) is not staying behind - at all. This 11-song album is filled with more tropical tunes and less of a reggaeton background, with "El Poeta" (The Poeta) leading the way.

In the past, Chino & Nacho have performed in Los Angeles, but those performances do not measure up to what is to come at L.A. Live in May. The concert will likely sell out, and is sure to please the audience from beginning to end.

Chino & Nacho will perform at Club Nokia on Friday, May 11, at 8 p.m. For more information about the show and to purchase tickets, click here.