Sound Of My Voice 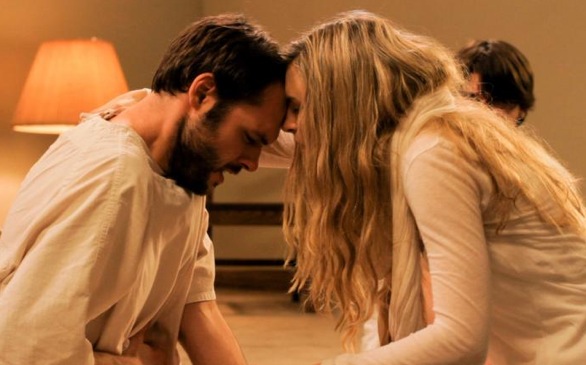 The future – the year 2054 to be exact – visits the present in the form of Maggie (Brit Marling), a beautiful and frail blonde who claims to be a messiah of sorts. Swathed in all white, bearing a rolling respirator for a crucifix, she amasses believers in a quiet suburban basement with the promise of guidance through the looming times ahead.

The gathering of followers has the makings of a burgeoning modern-day cult, except for a slight hiccup. Peter (Christopher Denham) and Lorna (Nicole Vicius), a squirmy kindergarten teacher and a bare-faced former party girl, infiltrate the group to make a documentary about it in an attempt to derail Maggie’s power.

Although it easily could have been, Sound Of My Voice isn’t another artsy handheld experiment. In fact, it’s a film created conventionally in almost every way –an intriguing plot told in a straightforward narrative complete with a fashionable soundtrack (courtesy of Vampire Weekend’s Rostam Batmanglij, director Zal Batmanglij’s brother). There are no cinematic gratifications nor newfangled schemes here. The inventiveness of the film comes in its lyrical way of taking an audience’s expectations, and then pulverizing those expectations and throwing them calculatingly out the window.

Denham and Vicius convincingly depict a disintegrating relationship, while giving each of their characters the careful, multidimensional treatment that they require. Marling, however, is easily the star. The indie darling mesmerizingly plays a fragile yet manipulative leader, and having co-written and produced the film as well, it is hard to imagine another actress playing one of the more perplexing roles in recent movies.

Intrigued? The first 12 minutes of Sound Of My Voice are available to be streamed online here.

Sound Of My Voice releases April 27.