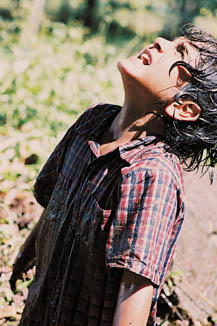 Untitled Document The power of Innocent Voices does not lay solely in its portrayal of an El Salvadoran community devastated by war in the 1980s but emerges, most significantly, in its vivid expose of human resiliency.

Narrated through the central character, 11-year-old "Chava," the film illustrates the day-to-day life of his poor community besieged by the war between the corrupt national government and the Farabundo Martí National Liberation Front (FMLN), a group of peasant rebels. As the story brilliantly displays the many dimensions of daily life for these residents, the film refuses to give in to a dominating theme of agony. One moment, Chava is celebrating with his friends at a birthday party, the next moment his family is running from a gunfire ambush. Another day may involve Chava attending class while one of his young classmates is being trained to kill women in front of their children. That is daily life for them: Normality entangled with overwhelming atrocities. The film forces the viewer to understand the endurance of a people’s commitment to continue on with their lives, their education and celebrations amidst the worst of human horrors intent on shattering their spirits.

Based on the personal memoirs of screenwriter Oscar Torres, the film builds faithfully upon his recollections as a firsthand witness. Despite the storytelling’s rich personal insight, every scene echoes the very public political images that became so closely associated with the identity of El Salvador’s civil war in the media. Those scenes include images of American troops, who are now known to have trained the "death squads" under the Reagan administration; child soldiers; and politicized priests (Archbishop Oscar Romero being the most famous).