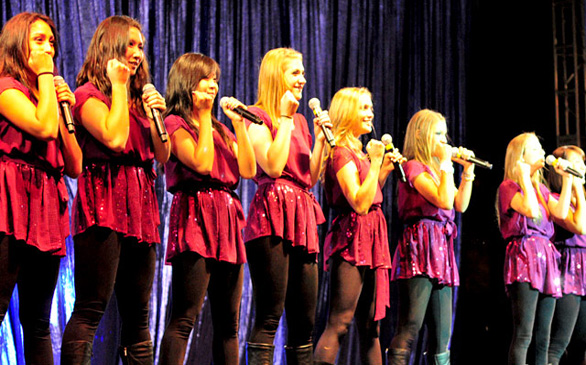 With Spring Sing right around the corner, here is a look at what's in store for Friday's show.

Solo/Duets-  There is a relatively young crop of talent in the soloist/ duet category this year.  Freshmen hold two out of the four slots in the category; soloist Nick Valentini and duet Andy and Toby.  Sophomores Halle Charlton and 2011 Spring Sing winner Courtney Randall fill the remaining two solo slots. On returning to the show, Randall says "I'm super excited for Spring Sing this year because I get the amazing opportunity to share my passion for writing and performing with a huge audience! It's a crazy feeling that I live for!"

Bands- Routinely overshadowed by solo artists in years past, this year's band category is one to watch. The five bands each have extremely diverse sounds, spanning from electro-pop to indie-folk.  From the five-man rock group the Ten Thousand, to the jazzy Yuki A Band, the band category holds strong contenders for the coveted title of Spring Sing winner. Spring Sing alumni Arianna Afsar returns to the stage with Arianna and the Roomies, Six Feet Off the Ground prepares for their first performance as a band, and string-based Alto brings folk to the stage.

A capella- Beyond the fun choreography and sweet harmonies, this year's a capella groups stand out for one particular reason- beatboxing.  The three a capella groups, Signature, Random Voices and Bruin Harmony, all have amazing vocal percussionists that bring down the house.  Prepare to be amazed.

Production- Returning acts DG & PiKapp and Omechis are joined by a new alliance formed by Alpha Phi & Lambda Chi Alpha.  The fun production numbers take Spring Sing back to its roots- originally a sing-off between fraternities in the 1940s.

Company- As usual, the comedic emcees of Spring Sing are working nonstop to keep the audience laughing the night of May 4.  Expect fun videos, clever skits and jokes for days. The group of 13 hilarious students have been preparing since February, writing all-original material, filming videos and perfecting their dance moves.