Eljuri Delights with Her One-of-a-Kind Music 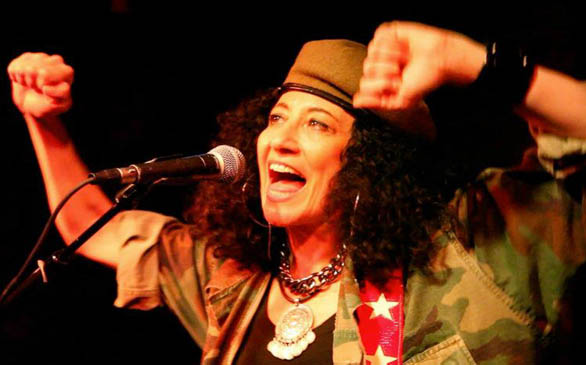 For Eljuri, diversity has been essential since day one: The singer and songwriter is very open to different ideas, especially when it comes to her musical catalog.

This unique talent was born Cecilia Villar Eljuri in Ecuador, but was raised and is currently based in New York. She says that her influences while growing up have been imperative to what she has accomplished, and what she will accomplish in the her future.

Currently, Eljuri has a new album in stores titled Fuerte (Strong), which was recorded in Los Angeles, New York, Colombia and Jamaica. According to her, L.A. is where she had the most fun recording.

"I love Los Angeles," she says. "The energy is really positive. I like the integration of many generations of Latinos here."

However, she singles out her home base of Manhattan as having a major impact on the development of her music.

"I think because I am half Lebanese, half Spanish, I was born in Ecuador and I grew up in New York, I was exposed to so much before hitting 10 years old," Eljuri shares.

As to whom she grew up idolizing, she said both her mom and dad inspired her to pursue this career path.

"It starts with my mother who is a musician," she says. "My father, as well, who is a performer in acting. They were my first...and then I discovered rock 'n' roll...The Rolling Stones, Led Zeppelin, Bob Marley, on and on..."

The musician's rock influences are apparent in Fuerte, which is also filled with a lot of wonderful fusions and global rhythms. The release includes 10 tracks and a bonus, "Paloma" (Dove), remastered as a remix with musical group Kinky.

One of the featured tracks is "Empuja" (Push), which is a mellow yet soothing Jamaican reggae-sounding tune. The superb song includes collaborations with Aly & Robbie and Mario Muñoz.

"It is a song about making a difference instead of being comfortable with the status quo," she says. "We have to push ahead for that change."

"Empuja" is a great opening song for the album, setting the tone for the rest of the melodies, and "Paloma" is another stand-out track.

"That song is very personal," Eljuri confesses. "'Paloma' is about allowing your own emotions to be set free and then they will fly. It is dedicated to someone very special to me; it is a positive and optimistic song."

Eljuri, who is often on tour, has learned a lot through her travels. That, along with her music, originality and humble ways, have diversified her not only as musician, but as a person as well.