After Dark Films Presents the Next Generation of Action Movies 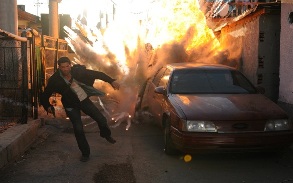 Scott Adkins in El Gringo, one of the After Dark Action original movies.
(Credit: facebook.com)

The movies are sure to thrill any action fan, with scenes chock full of martial arts, car chases, shoot outs and fights.

“Our mission is to create innovative, first-rate entertainment for action lovers everywhere," said Courtney Solomon, After Dark Films president and CEO. “The audience is in for a treat.”

Screenings of the After Dark Action movies will run from May 11-17 at the Chinese 6 Theatres, 6801 Hollywood Blvd., Los Angeles.

For more information about the After Dark Action film festival, visit afterdarkaction.com.