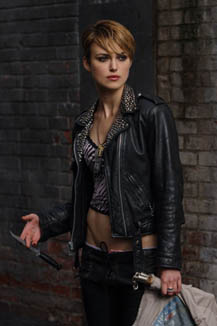 Nineteenth-century Georgian English drama and professional bounty-hunting in Los Angeles are pretty close. They are four days apart, as a matter of fact. At least, that’s the amount of turnaround time given to Keira Knightley to wrap Jane Austen’s Pride and Prejudice and begin Domino, opening Friday.

"It was really fucking stupid," Knightley says of her dramatic role reversal. "I don’t think I’d do them that close together again because I got so freaked out that I wouldn’t be able to get into the character, but in a funny kind of way I think that’s quite helpful for this part as well." Such a helter-skelter life may in fact be the perfect thespian fuel needed to take on the role of real-life Hollywood royalty-turned-model-turned-bounty hunter Domino Harvey.

Harvey, born to actor Lawrence Harvey of The Manchurian Candidate and Butterfield 8 fame, turned her back on her Beverly Hills lifestyle to join Ed Mosbey (here played by Mickey Rourke) and Choco (Edgar Ramirez) in tracking down and capturing criminals, hard-knock style.

Portraying Domino required a unique hybridization of methods. Initially, Knightley approached her subject directly. "I’d met Domino twice, had some good conversations. [Director] Tony [Scott] had recorded interviews with her, so he gave me kind of hours of interview stuff with her so I could hear her voice and I listened to that a lot," she says.

Knightley quickly saw Domino as a determined and complex woman. "It was great, playing a strong woman. You know, I remember when I was really young, whenever I watched a movie, it was never the women I wanted to play, it was always the blokes. And with this character, I thought, ‘wow, this is a character that could be a guy.’ It’s more interesting because she’s a woman, but it could be a guy," Knightley says.

But being thousands of miles away and centuries removed from Domino while playing Elizabeth Bennet in Prejudice demanded additional, more personal, more imaginative preparation. "Because I couldn’t spend the time I needed to do a characterization," she says, "I used my best mate Bunny, who I kind of had in the back of my head throughout. Because, I thought, ‘well, I need to pick somebody that I know inside out, and seems to have kind of the right vibe.’ So I kept my best mate in the back of my head."

With Bunny added to Knightley’s characterization, did Domino herself have anything to say about the fictionalizing of her life? "She went, ‘Nah, do what you want,’" Knightley says. "And to me, that said a hell of a lot about the character and that was one of the most helpful things she could have done, because it’s an incredibly strong woman that can say, ‘This is my name, but I’m allowing you to do what you want with it.’"

It was Knightley’s portrayal of another strong woman, Elizabeth Swann in Pirates of the Caribbean: The Curse of the Black Pearl, that convinced director Tony Scott (Spy Game, Man on Fire) that Knightley was the one to play Domino. "I watch film constantly, all the time, and I’d seen everything Keira had done since Bend It Like Beckham, so I thought, ‘let me take a look,’ and I’m looking at Pirates … and said, ‘fuck it, that’s Domino.’"

Once the actress was on set, Scott remembers the ease with which Knightley found her character. "She’s very accomplished and she’s got the best instincts," he says. "So I trusted her instincts so I didn’t have much to give … [except] the ‘British School of Direction. …’"

One who will not see the film as it opens this Friday is Domino herself, who died in June of this year, after the film was completed. For Knightley, Domino’s passing was both a tragedy and a reminder of her ephemeral, live-in-the-moment life philosophy. Indeed success, Knightley says, "… can come in a second and go in a second, and you’ve just got to ride the wave while it’s there. And enjoy it."