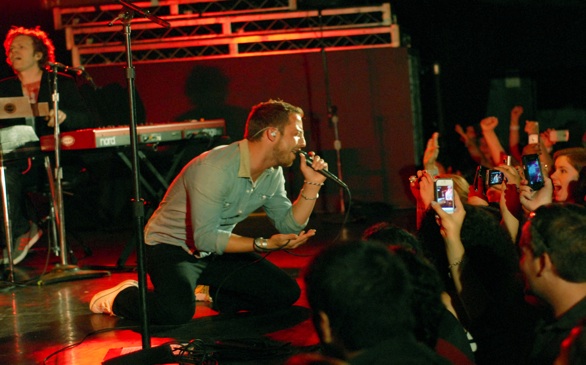 Last time English singer James Morrison performed in Los Angeles, an intimate audience of fewer than 150 people gathered at the Sayer’s Club to witness a private concert. Four months later, he returned to the Hollywood scene and pushed the capacity limits of the Avalon.

Fans crowded both levels and recited every single lyric of his 16-song set list, proving his American popularity is rapidly increasing with every live appearance. Accompanied by a keyboardist, guitarist, female back-up singers and a drummer, Morrison embarked on a 90-minute expedition, which included his signature raspy voice and seductive melodic rhythms.

The night began with Morrison running across stage high-fiving everyone in the front row. Dedicated fans raised custom-made posters and pictures in an attempt to gain his attention as he prepared to play "Beautiful Life."

Tambourines echoed throughout the venue along with catchy electronic keys. The collaborative musical effort from the plethora of musicians onstage created a mellifluous mixture of unique sounds, eliciting continuous enthusiastic clapping from everyone present.

After performing his sixth song, Morrison interacted with the audience, sharing personal stories about his songs and the inspirations that lead to creating his latest record. He then brought out an acoustic guitar and began playing "Broken Strings" off his second album. The audience erupted as he performed half the song alone, until the band reappeared to conclude the hit single.

The singer's ability to expose himself emotionally and creatively correlated seamlessly with the audience. Each emotion portrayed in his albums has a stronger presence before a live crowd. His latest album showed maturity and growth, which he acknowledged onstage, explaining that he was overcoming personal hardships during the three-year process.

Morrison’s ability to develop a relationship with the audience was unique and special; his knack for involving everyone into each song developed into a participatory shouting match during "Slave to the Music."

While performing upbeat songs, his projected energy had everyone swaying throughout the sea of bodies, but tracks like "Nothing Ever Hurt Like You" became a vessel for airing out troubled experiences. As the night appeared close to the end, Morrison played "You Give Me Something," a popular fan favorite that received arguably the loudest crowd participation. The audience ignited for an encore while Morrison recuperated backstage and built anticipation for his final performance.

Several minutes passed before he reappeared to a massive ovation. The three-song encore featured "The Awakening," "Under the Influence" and "Wonderful World," one of his most successful singles to date.

Morrison’s last album has sold half a million copies worldwide, establishing him as a main attraction throughout multiple countries. His American audience is rapidly increasing, leaving attendees desperate for the next local performance. The U.S. tour concludes mid-May in Boston, and continues overseas for the summer with fans eagerly hoping Morrison returns before the year ends.