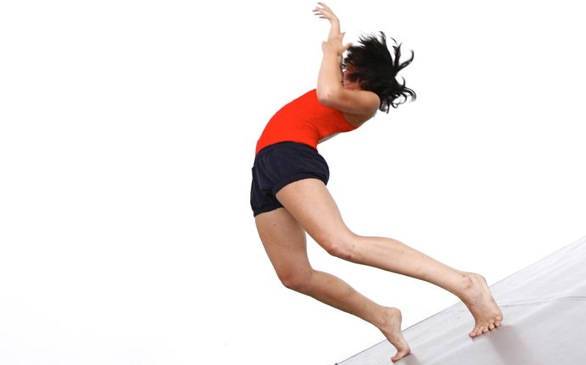 "5x5" takes a look back at LACDC's evolution as a company.
(Credit: Los Angeles Contemporary Dance)

It’s hard not to like L.A.-based choreographer Kate Hutter. She has a warm, intelligent and just plain happy vibe about her, and her cute blonde bob and sun-kissed smile just make you want to share the room with her.

Her outgoing nature seems really fitting for a person with the guts to start the Los Angeles Contemporary Dance Company (LACDC), a repertoire company that has worked with over 40 choreographers since 2005 to present new works each year.  Hutter decided it was time to access the untapped resource of artists in L.A. who don’t want to have their own companies, but had talent and vision to share. Hutter explains that LACDC is “an open platform for 'what’s next' that captures the energy of Los Angeles.”

The roots of the company are a group of dancers built over several years, who have diverse backgrounds in everything from hip-hop to jazz to ballet, and are able to work in several genres. Hutter wants dancers "who are as open in their minds as they are in their bodies."

This approach leads to a motley crew, and their process of finding common thread and forming a community brings strength to the group.

As an artistic director as well as a choreographer, Hutter can dip into the various production processes: watching, working with a variety of artists – including playwrights and musicians – and can keep "stretching herself to really understand performing arts: why do we do it and how do we do it well, with dance as the vocabulary."

Next week LACDC will look back through all that work, and pick pieces that highlight the milestones in the company’s seven years of existence. It’s their biggest show to date, with seven pieces and 18 performers showcasing their talents in the state-of-the-art Nate Holden Performing Arts Center.

Hutter says this show is a chance for attendees to "step back into history to see the evolution of the company, and introduce to new audiences those works that challenged and brought signature points in growth for the company."

She will be resurrecting three pieces - one of which is the famed "paint duet" from their first show in 2005, featuring collaborator Kevin Williamson, a whole lot of body makeup, and the music of the Postal Service. In addition, she will be bringing back the idiosyncratic work of underground movement guru Ryan Heffington, former company member Nichol Mason and two choreographers known for their commercial success in film and TV, Adam Parson and Terri Best.

As the company enters its next phase, Hutter sees promising community support. She will continue contributing to the cultural life of L.A., not only in theaters, but also with other more low key events including open rehearsals, with open bar that helps introduce people to dance in a comfortable way.

The LACDC will be performing "5x5" May 12 at 8 p.m. and May 13 at 6 p.m. at the Nate Holden Performing Arts Center, 4718 W. Washington Blvd., Los Angeles. For more information and to purchase tickets, visit lacontemporarydance.org/calendar/5x5.