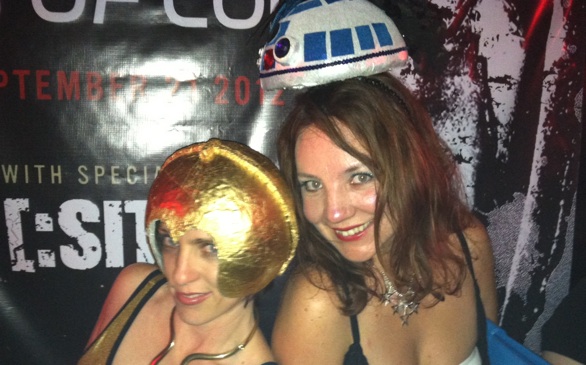 Last Friday night, fanboys and girls found their playground at Das Bunker, which in celebration of May the Fourth (a.k.a. Star Wars Day) transformed their club into the lands of a galaxy far, far away. The ambiance captured the spirit of a nightlife fans dreamed they could be a part of –and they finally were.

The lobby was akin to the metropolitan clubs of Coruscant, where you could run into Twi’leks, Bounty Hunters or Wookies, and watch out for Stromtroopers searching for Rebel spies or droids.

It was a gathering like no other. Das Bunker gave fanatics a place where they could mingle with other fans without it being a convention. Guests arrived decked out in their best Jedi or Sith robes, and princesses, queens, droids, and even Starfleet members all made appearances. Spiked blue milk inspired by Aunt Beru was available for consumption and was absolutely delicious. The various themed rooms included places like Hoth, Jabba’s palace and a cantina where Han always shoots first. Every room had music that married these places to the sort of feel that got people feeling the force.

It was only one night! After the night was over club-goers remarked that they wished they wouldn’t have to wait until next year to experience another Star Wars night. And it being the most successful night in Das Bunker history, hopefully organizers will take the success as a sign that they have cracked a code in what many people have been looking for. They got the recipe for a geek’s wet dream of night clubbing right last week, and now they have a demand that hopefully they will continue to meet.