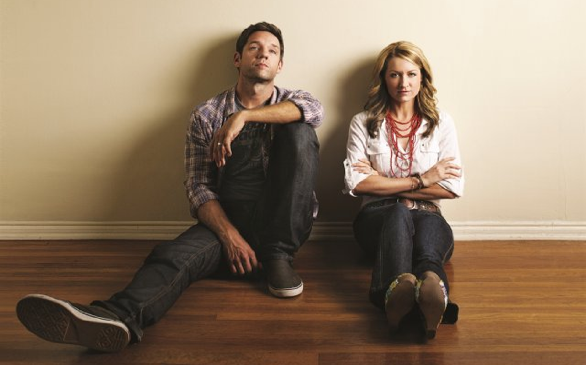 What happens when you grow up and aren’t happy with the person you have become? Can you travel back and revisit your former self? Neil (Todd Grinnell) and Sarah (Ali Hillis) attempt to do that in the film Nesting, co-written and directed by John Chuldenko.

The movie follows two 30-something former hipsters who have become full-fledged yuppies. Despite buying expensive coffeemakers, high-end furniture in colors like “toasted almond” and fancy new flooring, they find themselves in a rut. Longing for those carefree times of their former selves, Neil and Sarah impulsively deicide to head back to their old hip L.A. neighborhood. Illegally squatting in their previous apartment, they soon discover that being “young and fun” isn’t all that it cracked up to be.

Although the movie had good intentions, it felt like watching a student film project. The plot lacked originality: Watching 30-somethings cross over into yuppiedom and then freak about how they got there is a very worn story.

There were issues with the characters as well. Neil just seemed too corny and bland to make the audience ever believe he was once cool. There is a glimmer that his wife Sarah was edgy in her heyday, but it’s a longshot. How these two ended up together in the first place isn’t made clear either.

Neil’s best friend Graham, played by Kevin Linehan, was there to serve as comic relief, but he was far from funny; he was actually quite annoying. He came off like an adult suffering from arrested development who just kept spouting inappropriate things.

Hearing Neil constantly whine and complain about how nice their life turned out was a turn-off. Sarah was the sole breadwinner, yet Neil had no problem spending her hard-earned money. At one point he asks, “Are you happy?” If you have only been together for five years and are already asking that question, then it’s going to be a long road ahead for both them –and the audience.

Despite unlikable characters and mediocre acting, there were some bright spots in the film. Neil shined when he showcased his affection for Sarah, at one point telling her, “I love you so hard right now,” which was very endearing. In the end, we all want to hear someone say something like that.

Also, the sly comments about the current state of hipsters was witty and on-point, from jokes about the way they choose to dress in outfits suited for Jazzercise to their obsession with eating at “trendy” restaurants – one of which changed the name of a “Culture Club” sandwich to the “White Stripes,” simply because of the addition of mayo!

Overall, this film brought nothing new to the table, and lacked exciting characters. It was entertaining to catch a glimpse into life in a “cool” L.A. neighborhood and the people living in it, but it failed to make any lasting impression.