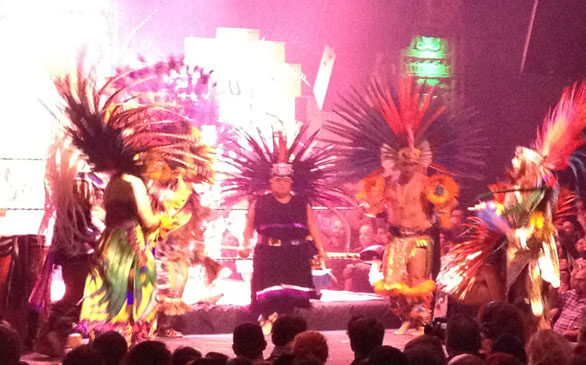 A lot of people don't know exactly what Cinco de Mayo is -- especially in California -- but that doesn't mean that it's not celebrated here.

Mexico's traditional Cinco de Mayo festivities were brought to life yet again during Lucha VaVoom/Cindo de Mayan at The Mayan in Downtown Los Angeles. Essentially, the Cinco de Mayan show is a renowned Mexican masked wrestling/burlesque/comedy performance that pays tribute to Cinco de Mayo --which, for those of you in the majority who don't know, is the celebration of The Day of the Battle of Puebla in Mexico, when the Mexican army became an unlikely winner over the French.

The near two-hour performance of various comical acts did not disappoint. In fact, it created quite a buzz.

In an almost packed venue, the night began with several individual dancers coming to stage to perform solo dance routines. None sparked the audience's attention more than the final dancer, who came on right before the wrestling matches began. At first, she appeared rather shy, not knowing what to do. Soon, however, the music seemed to penetrate her body in a very profound manner that led her to display some very exotic and physical moves.

However, that was just the beginning. In the end of her act, the dancer took her top off, and the audience came to learn that it was indeed a man behind the costume the entire time! The crowd seemed rather surprised at the outcome of that particular routine, so much so that everyone gave the performer a standing ovation accompanied by uproarious laughter.

The event continued with several comical wrestling matches, with some dance numbers in between. A highlight among the dance performances was an Aztec group, who presented a very creative and original routine. Other performers included semi-naked women and men, who danced while putting on a comical show. Some of the finest burlesque acts from around the world were also present, amazing this L.A. audience with their unique striptease skills, including raucous aerial acts, pogo-stick peelers and hula-hoop hotties.