Newcomer Karan Soni in Safety Not Guaranteed: The actor talks about his first movie role, time travel and coming to America. 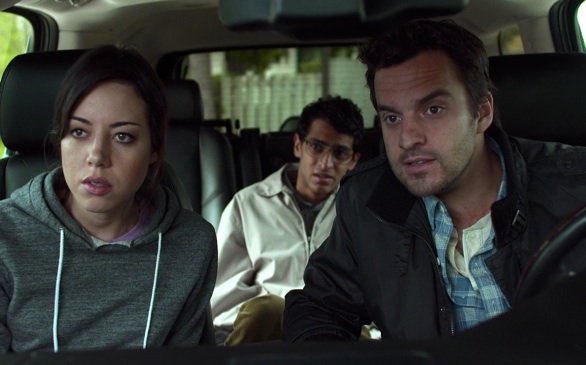 Safety Not Guaranteed is a quirky comedy about time travel (just to be clear, it is not a time travel movie) that has a lot of allure. The plot centers around a mysterious classified ad, which can speak for itself:

WANTED: Someone to go back in time with me. This is not a joke. P.O. Box 91, Ocean View, WA 99393. You’ll get paid after we get back. Must bring your own weapons. Safety not guaranteed. I have only done this once before.

As if this isn’t enough to entice curious moviegoers, it stars a carefully-curated cast: Aubrey Plaza, whose signature deadpan impression can charm the pants off of anyone; Mark Duplass, who nails the he-could-be-for-real-but-is-probably-an-axe-murderer “time traveler” role to a T; and Jake Johnson, now a familiar household face thanks to his hit TV show “New Girl.”

Less experienced, however, is Karan Soni, who plays a geeky biology major interning at a magazine “to diversify his resume.” This 23 year-old University of Southern California graduate holds his own ground acting alongside his more experienced cast mates, and speaking to the unassuming young actor, one wouldn’t doubt his promising future.

Like his character, who is a bit challenged with girls, Soni has some real-life experience as a fish out of water. He immigrated to the United States from India at the age of 18 to attend USC’s prestigious School of Theater. Growing up, he idolized the likes of Jim Carrey and Robin Williams.

“[Carrey’s] movies were really big in India. I had Ace Ventura and The Mask on VHS and I would watch them all the time,” he said. “I would play Mrs. Doubtfire almost everyday when I got home from school. I don’t know how many times I’ve watched that movie!”

When asked about moving to Los Angeles, he admits, “I had this weird idea in my mind that school in America was really easy. I [believed] it was just a matter of getting in, and then I would just fly to the top. I thought, ‘This is America! I would be smarter than everyone else!’” he laughed. “I expected everyone would be a sorority girl or a fraternity guy, but it was so different. Everyone is very competitive and really smart.”

Auditioning for a role alongside Plaza, Duplass and Johnson was not an easy feat either for the unknown theater student.

“It was pilot season so there were a lot of auditions, a lot of opportunities. I’ve been getting really close to many things, usually one or two people away from getting them. And then this one came along.”

Soni said he had instant chemistry with Johnson and Plaza.

“After I read with them I felt that I might get the part because we instantly got along. Something about it just felt good. The day after that, I got the part.”

The movie follows Soni as Arnau, his co-intern Darius (Plaza) and Seattle Magazine writer Jeff (Johnson) as they try to track down Kenneth (Duplass), the man who posted the classified ad. The subsequent turn of events involves rigorous survival training, the Secret Service, a reunion of high school sweethearts and the blossoming of Arnau’s manhood. Without giving too much away, the end of the film could only be described as delightfully unexpected.

“I didn’t even know the ending until I watched the movie for the very first time,” said Soni. “Aubrey didn’t know about it [either], so when we saw it, we both looked at each other and were like, ‘What just happened?’ It was amazing.”

So what would Soni do if he was given the ability to time travel in real life? Why, see the dinosaurs of course.

“I have a slight obsession with dinosaurs. I would be really curious to see them for one second and come back because let’s be honest, I could not fend for myself.”