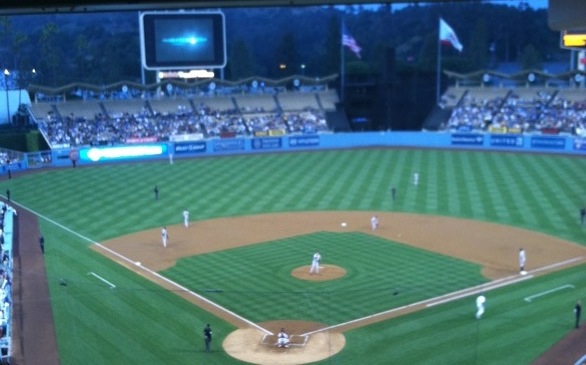 The energy was palpable in Dodger Stadium Tuesday night as the L.A. home team prepared to take on 2010 World Series champs, the San Francisco Giants, for the second game in the series.

Coming off a Monday night win, things seemed promising for the Dodgers, especially with star pitcher Clayton Kershaw on the mound, who has previously fared well against the Giants. Kershaw, who is just 24 years of age, achieved eight scoreless innings, including seven strikeouts. He allowed only five hits and a walk during the duration of the game.

Despite Kershaw’s best efforts, the team was unable to recover from the one-run lead the Giants held on the Dodgers after a double play in the second inning, when left fielder Brett Pill blasted a two-run homer that sent catcher Buster Posey to reach home.

Everyone in the stadium, which held 32,799 fans, seemed shocked after Kershaw surrendered the two runs. This makes his fifth allowed homer in seven total starts thus far this season. He is now 2-1 with a 2.56 ERA.

The last time Cy Young Award-winner Kershaw suffered a defeat on his home turf was over a year ago, on April 16, 2011. However, the Dallas-born pitcher took it in stride.

“I had one rough inning, but overall, I felt pretty good,” he told press.

The Dodgers retaliated with a run scored by Andre Ethier in the bottom of the second, but overall the team was unable to contend with Giants’ pitcher Ryan Vogelsong’s throws, and the score remained 2-1 throughout the game.

The height of excitement for Dodger fans came at the bottom of the eighth, with Bobby Abreu and Dee Gordon on base and powerhouse Matt Kemp at bat. However, Kemp was intentionally walked. This left the bases loaded for Ethier, which prompted fans to rise from their seats in anticipation of a late-in-the-game comeback. Sadly for the home team, a double play ended the inning, leaving the scoreboard in favor of the Giants.

The Dodgers will have a chance to redeem themselves in the last game of the series, tonight at 7:10 p.m.