Dark Shadows is a Spooky Trip into the '70s 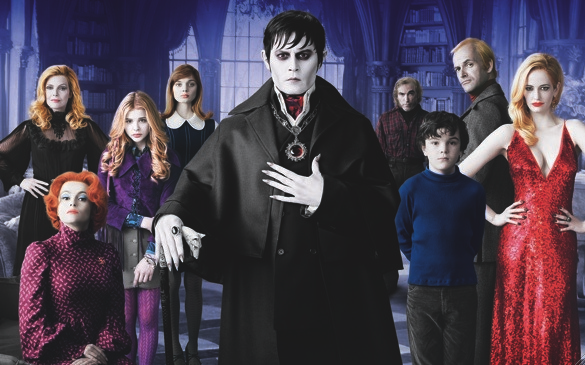 For Tim Burton and Johnny Depp’s eighth collaboration, they bring a re-imagining of the cult television series “Dark Shadows.”

The film tells the tale of the Collins’ family curse, which began when Barnabas Collins (Depp), a once-wealthy playboy from the 18th century spurns his former lover Angelique (Eva Green) for the beautiful Josette (Bella Heathcote).

Unbeknownst to Barnabas, the heart he broke was of a powerful witch who curses the Collins’ name, makes his beloved Josette plunge to her death, and turns Barnabas into a vampire condemned to suffer for all eternity. Encasing him in a tomb, Angelique unleashes her torment on the Collins family for 200 years, until Barnabas finally breaks free and vows to restore order in his family.

This is the first Burton-Depp collaboration not started at the suggestion of the director.

“I think it was during Sweeney Todd; I just blurted out mid-conversation, ‘Maybe we should do a vampire movie where we actually have a real vampire that looks like a vampire,’” said Depp. “Tim and I started talking about [‘Dark Shadows’], and Seth [Grahame-Smith] came on board, and the three of us riffed.”

Grahame-Smith, author of the novel Abe Lincoln: Vampire Hunter (which has been adapted into a feature film produced by Burton), was enlisted to help create a story inspired by the series.

“We sat around a table and talked about the things they [Depp and Burton] loved about the show, talking about moments that would be fun to explore,” explained Grahame-Smith of the filmmaking process.

The idea of unearthing a gentleman vampire who’s used to a more rigid and proper age to a more modern time is something Depp and the gang wanted to explore.

“He is brought back to probably the most surreal era of our time: the 1970s,” noted Depp. “[We wanted to show] how he’d react to things that were radically different than how things were; not just technology, but items of enjoyment like pet rocks, fake flowers, troll dolls, lava lamps.”

Blending Burton’s signature macabre tone with the style of the times to create a movie derived from a soap opera was no easy task.

“It’s a tricky tone,” admitted Burton. “When we talk about Dark Shadows, part of its appeal was the weird nature of all the elements that went into it.”

The cast took their director’s palate and worked to bring new interpretations of beloved characters. Eva Green even found inspiration for her characterization of the witch through Burton’s drawings of broken dolls from a book of his acclaimed art exhibit.

“Tim represents his own genre,” said Jackie Earle Hayley, who plays the family caretaker, and is the first to encounter Barnabas. “He’s a very unique filmmaker. His aesthetics, his stylistic storytelling, the choices that [he] makes, makes it go beyond making a film –he builds his own world.”

Barnabas arrives in a different time to find the old world that he knew and the new century overlapped atop the aristocratic Collinswood Manor.

For as long as Depp has been around, it’s surprising to note that even in his Hollywood bad-boy days, he may have been likened to a vampire, but never played one until now. So why this character and this movie?

Depp explained: “What’s most interesting in terms of Barnabas is the idea of the combination. It’s the real challenge, probably more for Tim than for me, to make this guy that is clearly a vampire fit back into this odd society, this dysfunctional family, and I think he did it rather seamlessly.”

One of the funniest moments in the film is Barnabas’s horror at discovering a secret room filled with crafts made by living matriarch of the family, Elizabeth Collins Stoddard (Michelle Pfeiffer).

Dark Shadows is the second collaboration between Burton and Pfeiffer, who last worked together two decades ago on Batman Returns. The reunion came about when Pfeiffer, a fan of the “Dark Shadows” television series, caught wind of the project.

“I don’t think I would’ve had the courage [to approach him, but] I was working with a mutual friend of ours who knew how much I wanted to be in this movie who egged me on,” she joked about their initial conversation. “I shamelessly called him: ‘Give me a job after 20 years!’”

The theme of the enduring nature of family is present in Dark Shadows, as well as within the collaboration between Burton and Depp, who have described their relationship as a brotherhood. The two worked carefully during the creative process to bring back a bit of the terror that vampires are supposed to elicit from people.

They also wanted to revive the classic look of the vampire, as opposed to the glamorized portrayals that have become dominant in pop culture (think Twilight and “Vampire Diaries”).

“Tim and I talked early on, [and decided that] a vampire should look like a vampire,” said Depp. “It was a kind of rebellion against vampires that looked like underwear models.”

While he may not be an underwear model, pretty-boy type, Depp is a true cultural icon who doesn’t need any awards to demonstrate his success –his achievements are far greater than that. His cultural impact stretches generations: From the original “21 Jump Street” to the Pirates of the Caribbean movies, he draws audiences in –and continues to work his silver screen magic with Dark Shadows. With his seemingly everlasting career, one could accuse Depp of making a deal with the devil.

“You’re missing the point –I am the devil!” he joked –or at least a vampire, for now.