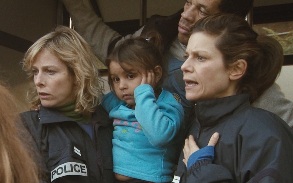 For the officers of the Child Protection Unit, it’s just another day in the office: arresting child molesters, interrogating abusive parents, taking statements from children, all the while trying to live a normal life as parents and spouses.

After extensive research and months spent with actual CPU officers, French writer-director Maïwenn delved into bringing light to the untold story of this particular branch of the law in her film, Polisse. Wanting to stay as close to the real thing as possible, Maïwenn didn’t refrain from speaking of pedophiles, incest or the exuberance of teen sexuality.

Like in any police film, this one revolves around a tight-knit unit of officers who spend almost all their waking hours together, from the unfortunate cases of the day to after-hours drinks to let off steam. However, as cases start coming to incomplete conclusions, their work begins to hit close to home.

Already trying to grapple with the bitter sting of divorce, officers Nadine (Karin Viard) and Fred’s (JoeyStarr) escape is their children, but the reality that they live with is enough to put a barrier between them. In a pitiful scene, Fred can’t even stand to touch his 4-year-old daughter as she takes a bath, a scene derived from true accounts of CPU male officers who said they are unable to even tickle their daughters.

The film does a reputable job covering a wide array of cases and the emotional weight it pulls on each character. Although the majority of cases deal with the inaudible violence taking place at home, the officers have to be the ones to separate a child from a loving parent in the child’s best interest. Fred takes this part of the job especially hard, and in one heartbreaking scene, he must be the one to tell a young boy he will never see his mother again after no shelter will take them both. Fred looses all composure hearing the desperate cries of the child, and takes him in his arms as if he were his own in a powerful and honest performance.

Even though the film deals with a very serious theme, Maïwenn plays with bringing humor to the most unexpected things. It adds to the officers’ reality; for them, without humor life would almost be unbearable. She also pays careful attention to the interpersonal relationships between the officers. The close dynamic they share gives way to tensions that slowly build and eventually erupt in various explosive confrontations.

With its true and gritty characters with undeniable problems, Polisse commits to a realistic account of the lives behind the officers whose sole purpose is to protect those who can’t defend themselves.

To find out more about the film, visit the official Web site.