Yam Laranas's The Road is a Masterful Psychological Thriller 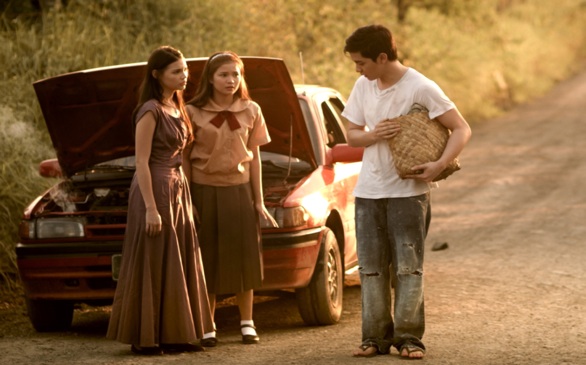 Perhaps it is the three stories within one, or the original horror entwined in the plot of this foreign film that make The Road one of the best movies for the ages in its genre, but the fact is that director Yam Laranas created a masterpiece.

“I look for inspiration here and there,” Laranas says, who in this case found it through a painting.

A psychological thriller out of the Philippines, The Road tells three different stories in three parts. However, they relate to the movie’s essence – a catastrophic past that leads to a series of unfortunate and evil events from beginning to end.

“The biggest challenge was to make logic of the story being told in reverse,” Laranas says. “I want you to feel a lot of things. To me, at the end of the film there are a lot of interpretations and different points of view. I see that as something that is new, which I am hoping will resonate with the audience.”

In part one, two girls, Ella and Janine, and a boy named Brian are on a joyride in the middle of the night in 2008. Brian takes charge behind the wheel in an effort to teach both how to drive. Suddenly, they enter a lost road that leads into the woods –and this turns out to be the biggest mistake of their lives.

“I was wondering about how it is to be trapped after one stupid mistake of going out and road tripping,” Laranas says. “What if I make this one really creepy road and create a ghost story?”

Part two features an incredibly gorgeous Rhian Ramos as Lara, the older sister of Joy, in 1998. It is daylight while Lara drives with Joy on the road. After passing a teen Luis (Alden Richards) while driving, their car breaks down. In need of water, the girls ask for help. Luis offers them just that, but instructs them to follow him back home. What evolves is a disaster for both.

“I was looking for a connection, and then came the story of the sisters,” Laranas shares. “This was inspired by a real crime in the Philippines.”

Laranas said that this part of the plot carries the scariest moment of film.

“These are things you do not expect and that seem real. Real fear and real horror are things that we can relate to.”

Throughout part three, we see a young Luis (who also is in part one but at a much older age) at home suffering from physical, mental and emotional abuse from his mother Carmela (Carmina Villaroel), an unfaithful woman about to leave her husband Alberto (Marvin Agustin) and son for a lover.

After much begging for positive change, Alberto does the unthinkable to his wife and himself. This leaves the young Luis alone with degrading images of the occurrence.

In the end, all questions are answered in distinctive fashion, but others arise in this cinematic portrayal of murders, abduction and crimes.

The Road took five years to make, and was shot entirely in the Philippines.

Asked about a possible remake of it in the U.S., Laranas mentioned his potential involvement.

“It hasn't crossed my mind at this point,” he says. “But if ever that happens, I may just help produce it.”

For its creative plot, solid acting, daring psychological thrills and prolific direction, The Road is the must-see horror flick of the year.

“I think somebody looking for a scare and a good time will find what they are looking for,” Laranas says. “Juxtaposing terror and beauty makes for an exciting visual experience, and I think that is present here.”

The Road releases May 11.

Special Features
Digital theater is all the rage, but could it destroy the live stage?
180 views

Special Features
Now’s the perfect time to dive into musicals. Here are our critic’s top 7 to watch
231 views

Special Features
Oscars 2020: Who will win and who should win
855 views

Special Features
Secret screenings. Redacted scripts. How they make the twists in ‘This Is Us’
351 views