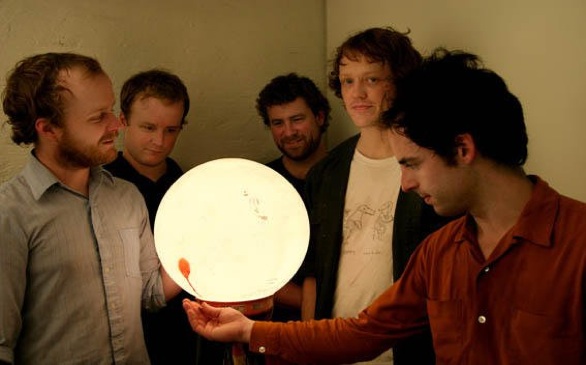 The band is gearing up for a performance at the El Rey on May 19.
(Credit: facebook.com)

For more than two years, Clap Your Hands Say Yeah didn’t know if it would ever play a song together again.

After all, taking that much time off often means suicide for a band these days.
But for the Brooklyn-based indie rockers, the hiatus helped them rediscover their identity and redefine their purpose. The reputation the quintet had built in 2005 after enamoring droves with its self-titled debut album hadn’t been completely tarnished.

So when CYHSY finally reunited last year to release its newest piece of work, Hysterical, the songwriting had jumped leaps and bounds from what fans heard on a lackluster sophomore effort, Some Loud Thunder.

Frontman Alec Ounsworth, however, may have benefited the most, spending his time down in New Orleans writing a solo album with some of the city’s best musicians — bassist George Porter Jr. of the Meters, drummer Stanton Moore of Galactic and keyboardist Robert Walter of the Greyboy Allstars, to name a few.

“To come back with a new record meant two things,” Ounsworth explains. “It meant coming back with more material and [figuring out] how to present it in a live format, but also how to come back and play as a band.”

Now, after months on the road touring the U.S. and Europe, Ounsworth finally feels like things are clicking on stage for CYHSY once again.

“I’d like to say we have it nailed, but we’ll see,” he says with a laugh. “It’s just a matter of everyone getting comfortable with their parts.”

And when that happens, the real magic ensues for Ounsworth and his band mates.

“Once you get comfortable, the show becomes what it should be — based on instinct,” he continues. “That’s what makes shows interesting. ”

Meshing the old with the new in its live show hasn’t been the issue for CYHSY. It’s just taken some time to rebuild that chemistry it once had.

“The more I’ve been playing with these guys, the more I understand how things work in this project,” Ounsworth says.

In a live setting, the band thrives in small clubs, something Ounsworth primarily envisioned when he first teamed up with his four friends from Connecticut College.

“It’s a strange band,” he admits. “It’s a bigger sound, but it’s a strange sort of format because the songs are written in such a way that we’re not going for the big festival thing.”

Even so, there have been opportunities for CYHSY to play among the masses, whether it’s been at Outside Lands Music & Arts Festival last summer in San Francisco or a trip to the jaw-dropping Gorge Amphitheatre over Memorial Day weekend for Sasquatch! Music Festival.

Before it heads for the Pacific Northwest at the end of this month, the band will make a return to Los Angeles for the first time since appearing at Culture Collide Festival with a Saturday, May 19 show at the El Rey Theatre.

It’s a venue that CYHSY hasn’t played in over six years, yet one that Ounsworth still remembers despite not having spent a lot of time on the West Coast.

“Everyone talks about audiences in Los Angeles as being somewhat distant, but it didn’t seem to be the case for us,” the Philadelphia native recalls.

If there’s one thing for sure, CYHSY hasn’t had an easy time booking dates in the City of Angels of late. It was originally scheduled to play Sunset Junction Music Festival in August before the event was shut down due to financial troubles, and a makeup show at the Echoplex in September was also wiped out when Hurricane Irene cancelled the band’s flight to L.A.

But with a group of guys who have found their groove again, CYHSY should feel pretty good about what could be in store at the El Rey this time, too.