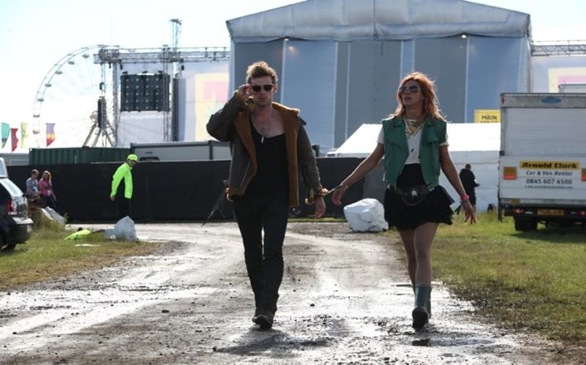 Luke Treadaway and Natalia Tena in Tonight You're Mine.
(Credit: Roadside Attractions)

Everyone knows about Coachella, the massive music festival that many Angelenos flee to for the weekend each April, where the West and East coasts come together for three days of music and fun. Now imagine the thousands that attend Coachella and times it by two to get the Scottish version, T in the Park! Director David Mackenzie wanted the audience to experience what that one-of-a-kind festival feels like up-close and personal in his film, Tonight You’re Mine.

The movie is a little bit of music, friendship and love all rolled into one. Adam (Luke Treadaway) is one half of the fictional Californian electro-pop duo the Make, who has an unlucky encounter with English rocker Morello (Natalia Tena) backstage, a punk rocker who can’t stand Adam and what he and his music represent. When an employee working the festival sees them bickering, he comes up with the bright idea to handcuff them together and flee with the key, leaving them to figure out what to do and where to go next. With looming performances and irritated significant others, they must figure out not only how to cope with their current situation, but actually get along.

One of the best things about this film is that it was shot on location during the actual festival. Rather than try to recreate the feel of T in the Park, the filmmakers went renegade style and managed to shoot the entire film in a mere four and a half days. The audience gets glimpses of the performing musical acts, and sees real crowds dancing and sloshing through the mud in their galoshes and Wellies.

Even though some could label the movie a simple rom-com love story, it felt modern and fresh, with references to social media and Twitter accounts.

The fact that the actors actually have musical talent helps the story flow and move along as well. Tena has a sexy, raspy voice that draws you in, while Treadaway shines when he sings in an acoustic musical style.

The other cast members are hit or miss: some add to the storyline, while others could have been left out. For example, Adam’s other half Tyko (Mather Baynton) has amazing comedic timing and is extremely likable, but his girlfriend Lake (Ruta Gedmintas) is simply obnoxious.

There were a few other misfires and less-than-believable parts, but not enough to dissuade enjoyment of the film overall.

Tonight You’re Mine successfully blends simple scenes with loud and chaotic ones, providing the audience with many delicious moments to savor. Ultimately, it’s about finding unexpected connections, questioning what it is that you really want at your core, and being open to the possibility of change.

Tonight You’re Mine releases May 11.