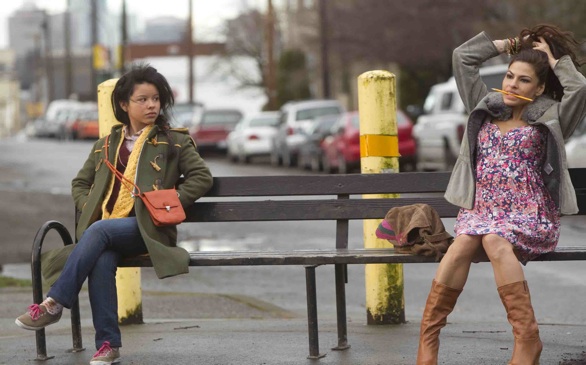 A coming of age story, Girl in Progress documents a young person’s transition from child to adult.

The film centers on Ansiedad (Cierra Ramirez) – appropriately named for the Spanish word for “anxious” – a teen who yearns to be an adult and leave her absentee mother behind. She hopes that by completing a “rites of passage” checklist, she will be able to fast-forward through her childhood and become the adult that her mother refuses to be.

She keeps this checklist on her bedroom wall, a clear call for help to her mother, Grace (Eva Mendes), with whom she has a complicated relationship, largely due to the fact that Grace is never home.

Grace is not exactly an ideal role model either – a young mother who refuses to grow up, she works a waitress at a diner and is carrying on an affair with a married man. Ansiedad often ends up caring for her mother, removing her shoes when she comes home drunk; she is forced to become the responsible one in the house.

To complete her rites of passage, however, Ansiedad begins to rebel. She starts by telling her mother she will no longer be doing dishes, but soon her acts of rebellion spiral into increasingly bad decisions.

She ditches her kind, but overweight best friend and hangs out with the “bad girls.” She goes to a party, tricks a man who works with her mom into buying her tequila and becomes determined to lose her virginity.

Ansiedad buys herself a train ticket and decides that after she completes all the necessary rites of passage, she can leave her home and start her life as an adult, without her mom.

Grace barely notices Ansiedad’s rebellion. She is too busy trying to prove herself to her boss, juggling a complex love life and making enough money to support her and Ansiedad. She is so caught up in her own affairs that she does not realize the changes her daughter is undergoing.

Both Ramirez and Mendes play their parts beautifully. Ramirez is especially fun to watch as the good girl trying to be bad. She carries the movie, and without her the film would have lost some of its edge.

Mendes is cast perfectly in the role of Grace. She seems overwhelmed by life, but yet she is unwilling to make the sacrifices necessary to grow up and be a mother to Ansiedad.

Another standout performance comes from Patricia Arquette, who plays Ms. Armstrong, the teacher that first introduces the idea of a coming of age story. She is also the person that winds up being a mentor for both Ansiedad and Grace in the end.

While the movie is a bit predictable at times, overall, the writing and acting make it quite enjoyable.

Girl In Progress is now playing.