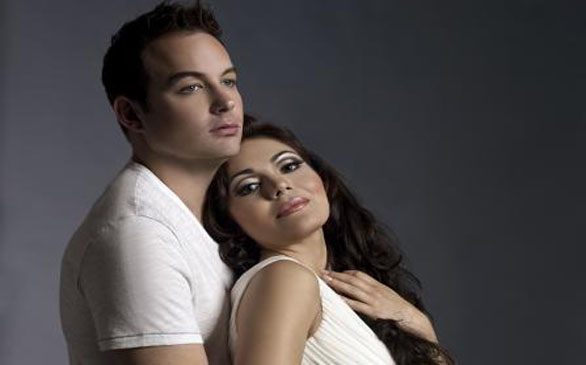 To close out the 2011-12 season, the Los Angeles Opera is bringing the delightful "La Boheme" to the stage, starring prominent young performers Stephen Costello and Ailyn Pérez.

“Fantastic,” Costello says of performing the touching script together onstage.

“La Boheme” features four acts that take place during the Bohemian era in Paris at Christmastime. The provocative tale centers on Rodolfo (played by Costello), a passionate poet, and Mimi (played by Pérez), a seamstress. A love connection between the two develops rapidly.

“Mimi is his neighbor,” Pérez explains. “They instantly fall in love. [Rodolfo] is inspired by her, and finds a [poetic] flow.”

Costello, an operatic tenor, and Pérez, a soprano, both in their early 30s, have no trouble playing a couple onstage, as they are married in real life. They met at the Philadelphia Academy of Vocal Arts and wed in 2008. Both reside in Tennessee.

“It’s a big connection,” Pérez adds. “There is something special between us.”

Pérez, whose parents are first-generation Mexican immigrants, attended the Indiana University School of Music. Recently, she won the Richard Tucker Award, given to a performer with a high level of artistic achievement who is on the verge of globalizing his/her career.

When asked about being a Latino in the arts, she replied: “This is the right time. What a wonderful time it is today to be a part of the arts and every aspect of culture. The opportunities are really opening up.”

In addition to Pérez and Costello in the lead roles, “La Boheme” features Janai Brugger (May 12-23) and Valentine Fleer (May 26–June 2), both as Musetta. Artur Rucinski, making his L.A. Opera debut, plays the aspiring painter Marcello, Musetta’s love interest.

“They all live a bohemian life [and are] trying to find themselves,” Costello explains.

The story follows several young individuals who don’t want to grow up, but eventually are forced to. Love, romance, maturity, drama and death all arise throughout the tale.

“It captures a moment of reality [for these] young people,” Pérez adds.

With projected English translations, Giacomo Puccini’s “La Boheme” is sure to be a thrilling operatic performance.

“You should be able to get the gist of what is happening just by watching as well,” Pérez says, noting that the acting of the singers is that good that they don’t even need translations.

When watching “La Boheme,” be ready to be inspired, energized and motivated in a vivid and profoundly magnificent manner.

“It is a great opera,” says Costello. “It has great music. For people who have not been to the opera, it is a great first opera. People can relate to it…and it is a great cast.”