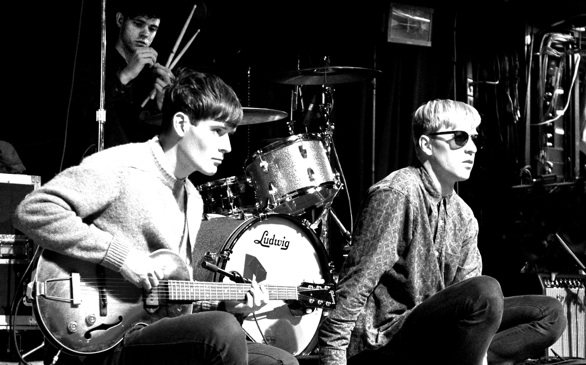 The Drums, the band who emerged in Brooklyn via Florida in 2009, is back with their latest dose of indie-pop with Portamento (Sunkissed Records).

The group, comprised of Jonathan Pierce (the singin') and Jacob Graham (the stringin'), first caught the ear of the indie world with their Summertime! E.P., an escapist collection of beach pop fantasies; tracks suffused with a wistful, longing nostalgia that never pandered to cheap sentimentality. The album gained them instant notoriety in the U.K. and recognition throughout Europe.

Buzz around them continued to grow after the release of their self-produced, self-titled debut L.P. in 2010, full of upbeat pop songs and dark dream noise. Portamento, released just 14 months after their debut, reveals a band tugging lightly at the boundaries of their sound, while still retaining their recognizable sonic signatures —sweet rushes of melody, winsome lyrics and brittle synthesizer sheens colliding with sinewy Spector-esque guitar and bass lines. Pierce’s lyrics have also assumed a more bold and personal tone, evinced from the outset on opener “Book of Revelations,” with its brazen examination of religion, through the bittersweet closing love song “How It Ended.”

Pierce explains, “When doing the first album, we were obsessed with vintage Americana sort of things. There were personal moments on the first album and E.P., but it was very idea-driven and conceptual. We wanted it to be like a scene from a movie. Now that’s gone. [On] the new album, it’s like every song is a scene from real life; [it] touches on everything from my extreme religious roots to transgenderism to violence, and of course, there’s plenty of heartbreak stuff, which I couldn’t get away from even if I tried.”

Graham elaborated on the differences between the two albums.

“When we wrote the first record, we imagined we were living in a movie form the ‘50s,” he says. “The whole thing was very innocent, and no one was paying attention to us then. We were on our own with no friends, cut off from the world. Our new album is set in the real world and written from a current point of view.”

In their makeshift fashion, the group once again opted to record their latest work in their Brooklyn apartment. Their sophomore effort only took a few months to record, and a few more months to master. Their new sound brings you out of the movie and into a completely different mindset that makes you feel like your casting a spell in a faraway mountain one second, and then playing hide-and-seek with Peter Pan and the Lost Boys in another.

These “Drums” are always moving forward without missing a beat. According to the band, their new album, much like their previous, flowed into existence easily and without many difficulties. When Graham speaks about the recording process, he’s very calm and soft-spoken; he talks about it as if it were all done in one leisurely afternoon.

“Jonny and I have been in bands since we were kids, and have been writing and recording songs our whole lives. When we started this band, we had a very clear idea of what we wanted to do,” says the singer, who is also a fanatic of old-time country trio, the Carter Family. “We don’t really stress out about things, we just know, and once we start in one direction we don’t stop until we finish.”

If you think creating beautiful, soul-capturing music is easy for this group, you’re absolutely right. Graham isn’t shy to admit that their chemistry is unique and their work comes unconventionally easy. In fact, music comes so easily to them that they constantly trash songs before they complete the album.

Their confidence is obvious, but so is their modesty and candidness. They like what they do… no strike that, they LOVE what they do, and it shows in the form of what they call “effortless pop.”

What do they mean by that? Graham explains.

“For example, a song like ‘I will Always Love You,’ by Dolly Parton: When you hear her sing it, you imagine she must have written that in like five minutes,” he says. “She couldn’t have possibly spent a lot of time writing it because it’s so simple. It sounds effortless, and that’s what we’ve always been going for.”

When you hear the “effortless” sounds of the Drums, you assume they went to school for music, or were classically trained. Their music just flutters softly into your ears and penetrates your soul. In reality, the only school they’ve been to is “the school of life.” They simply let their fascination for music take over; the result is nothing short of impressive.

“Jon and I didn’t go to school for anything, probably because we were obsessed with music,” says the 28-year-old. “During my senior year of high school, I took off halfway through it to do a tour with our old band and almost didn’t graduate high school because of that. Luckily I did.”

The gamble paid off, as their years of experience playing music have culminated with the impressive –and interestingly named – Portamento, which sounds like an ancient artifact of a type of mushroom. The word is actually a musical term originated from the Italian expression “portamento della voce” (carriage of the voice), a term from the 17th century that denotes a vocal slide between two pitches and its emulation by members of the violin family and certain wind instruments. It is also applied to the “glide” function of synthesizers, which is why they chose this particular name for the album.

“Ironically, we’ve both loved synthesizers since we were little kids,” says Graham. “This word always stuck out for us because most of the words on the front panel of an old synthesizer are very scientific, like frequency, oscillator… A word like ‘portamento’ just stands out.”

This second work is just as seamless and enigmatic as their previous work. The first record made them the indie-pop darlings of Britain, and this one will allow them to conquer this side if the pond, no doubt. After all, the dream this band has created for itself continues to amass and flow like liquid energy. So what’s next for these guys?

“I think the record industry is in a weird transitional state right now, [so] it’s hard for anyone to have a real plan these days,” admits Graham. “We’re just taking things as they come. We don’t have a plan, but we are drowning in a sea of different ideas that we could grab onto.”

Catch the Drums at the El Rey Theatre tonight, May 14 and tomorrow, May 15. For more information and to purchase tickets, visit thedrums.com.