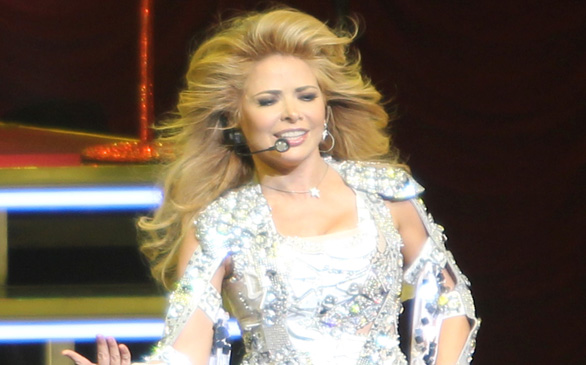 Mexican pop singer-songwriter Gloria Trevi held the privilege of kicking off the long-anticipated weekend event. Known as the Supreme Diva of Mexican Pop by many, Trevi utilized her positive demeanor, good looks, legendary repertoire and highly-spirited personality to rock the house.

Trevi, who has sold over 20 million albums worldwide, began her spectacle with tracks from her most recent disc (Gloria). This served as a perfect opening for the much-admired singer, who now resides in Texas.

Throughout the night, Trevi enticed the crowd with songs dating back to the beginnings of her illustrious career. One of these wonderful moments came when she sung "Pelo Suelto" (Loose Hair), arguably her most popular song.

Others performances included "Soledad" (Solitude), "Cinco Minutos" (Five Minutes) and "Pruébamelo" (Prove It to Me). She finished the show with "Mañana" (Tomorrow), an uplifting tune for all in attendance.

With "La Banda del Carro Rojo" (The Band with the Red Car), Los Tigres del Norte began their musical segment, followed by "La Mesa del Rincon" (The Table of the Corner). These two tracks set the the tone for LTDN's following numbers.

They continued with such hits as "Jefe de Jefes" (Boss of Bosses), "La Puerta Negra" (The Black Door), "Una Camioneta Gris" (A Grey Truck) and "America." To end their cultural performance, the group sang "La Reina del Sur" (The Queen of the South), which pays tribute to the most popular and powerful female drug queen of all-time, Teresa Mendoza of Sinaloa, Mexico.

Urban sensation Calle 13, who have won 19 Latin Grammy's and 2 Grammy Awards, closed out the concert series with a resonating performance.

They followed the night's opening act, Illya Kuryaki and the Valderramas, an Argentine funk duo comprised of Dante Spinetta and Emmanuel Horvilleur, who gave the audience a blend of Latin hip-hop, rock and tropical music. One of their most popular songs, "Coolo," featured an eclectic concept of singing/rapping lyrics and sound fusions, and a free-style salsa-type instrumentation to finalize the track - marvelous!

Then came the musical act the crowed had been waiting for. Authentic from the start, Calle 13 (consisting of stepbrothers René Pérez, known as Residente, and Eduardo Cabra, Visitante) managed to display their musical roots and showed what has made them popular since 2003. Visitiante showed off his signature mixture of tango, bossa nova, cumbia, salsa, jazz and electronica, while Residente wowed with his lyrical style, full of sarcasm, satire, parody and shock value.

"Pa'l Norte" (To the North), "No Hay Nadie Como Tu" (There is Nobody Like You), "La Cumbia de los Aburridos" (The Cumbia of the Bored Ones), "Tango del Pecado" (Tango of the Sin) and "Baile de los Pobres" (Dance of the Poor) were among the popular tracks Calle 13 performed onstage. But it was "Atrévete-te-te" (Dare Yourself) that stole the environment's energy with its comical parody in the lyrics and fruitful sounds of tropical beats.

Residente spoke to the fans at various times. At one point, he greeted them in his second language. "So, do you want me to speak Spanish or English. I speak very fucked up English," he said with his Boricuan accent. The crowd laughed and cheered him on, enamored with his authenticity and ability to say what he feels without fear.