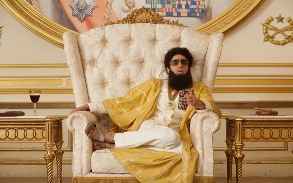 When a film begins with the dedication, “In Loving Memory of Kim Jong-Il,” the audience knows they’re in for a ride. Director Larry Charles and Sacha Baron Cohen team up again for their newest film endeavor, The Dictator.

Baron Cohen stars as Dictator Admiral General Aladeen of the fictitious North African country Wadiya. An egocentric maniac, obsessed with nuclear weapons and constant threats to his nation, he is summoned to the U.N. in New York City to address the world on his beliefs. While there, he befalls an evil plot from his embittered uncle, Tamir (Ben Kingsley), who has hired a double to pose as Aladeen. Having his trademark beard chopped off, the real Aladeen is forced to wander the streets of Brooklyn as a simple tourist. At a protest, he comes across Zoey (Anna Faris), a hippie, vegan feminist who runs a health food co-op that employs refugees from all around the world. He hopes that she can help him regain his rightful throne, and find a way back into power.

Immediately, this movie has laughs with the sheer absurdity of it all, including his reign since the age of 7 and his female coterie of sexy bodyguards. However, there is social relevancy within this satire; similarities between this fictitious dictator and previous leaders like Muammar Gaddafi and Saddam Hussein cannot be mistaken. He never makes direct comparisons by stating names, but he spoofs a lot of the choices and decisions made by those real men in charge.

Different from Baron Cohen’s other pseudo-documentary style films Borat and Bruno, this one actually has a plot with a noticeable beginning, middle and end. Part of the joy of his prior films is seeing him in character approaching unsuspecting people, and there is a loss of that spirit in this film; however, he definitely remains scandalous, crude and rude!

One of the film’s most entertaining aspects was seeing Aladeen’s reaction to Zoey’s health food co-op, whose clientele were spoofed to perfection. Aladeen’s complete ignorance to the idea of free speech and women working was hilarious. Baron Cohen and Faris’s chemistry started off a little forced, but then turned into something natural as the film evolved. It was refreshing to see Faris dressed down and not oversexed like her usual characters, but as the complete opposite, with unsightly underarm hair and baggy clothing.

Throughout his journey through New York, Aladeen also befriends a former Wadiyan nuclear scientist Nadal (Jason Mantzoukas), whom he thought he had killed. There is an interesting bond and friendship that develops, which makes for funny ride.

Surprisingly, the movie’s soundtrack was also a highlight. There is great music throughout the film –with a twist: Dolly Parton’s "Nine to Five" and Marvin Gaye’s "Let’s Get It On" are sung in a Middle Eastern language!

Filled with Baron Cohen’s typical outlandish behavior, The Dictator is not for the politically or culturally sensitive. If you are easily offended by sexist and racist jokes, this film should get scratched off your list. However, Baron Cohen uses his humor to examine a lot of the real absurdities going on in the world today, which makes for a great (and still entertaining) social commentary.

The Dictator is now playing.