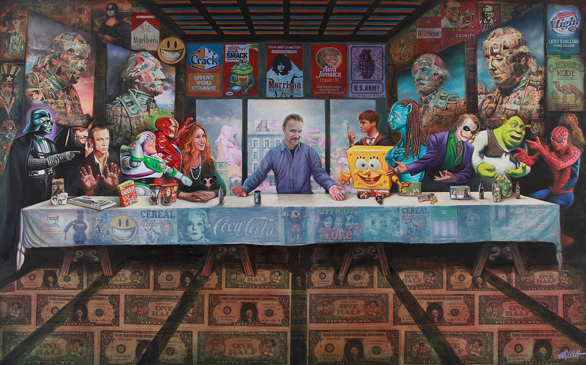 The name Morgan Spurlock doesn’t exactly ring art. As a filmmaker he is an artist – in the way people are when they aren’t exactly doing mathematical equations or lab experiments in their chosen profession. We’re talking about visual art in its most obvious sense here, the kind that uninterested viewers yawn or scoff at with reckless misconceived judgments. Spurlock earned his celebrity status by spending long hours in the video editing room, not locked up in an art studio. So really, anyone is at liberty to ask, what business does Mr. Super Size Me have curating an art exhibit?

Turns out, aside from changing America one uneaten Big Mac at a time, the accomplished director and producer is a massive art collector as well. And in the form of “New Blood,” his latest plunge into the art world, Spurlock is putting his name into altruistic use.

“The concept of the show is how the torch is passed from one artist to the next,” Spurlock explains. “One opens the door so another can follow, and this show is all about artists who I think have, and are continuing to, impact and change the art world. Each one of these artists is bringing along an apprentice or protege who they think we all need to know about –the artists they believe are the ‘New Blood’ of the art world.”

The goal is simplistic yet genius. If you think about, it is exactly what Spurlock is accomplishing himself. The opening reception on April 28 brought together a well-dressed group of characters shoulder-to-shoulder in the intimate Thinkspace Gallery, and one can bet that not everybody in the room can tell you who Ron English or Elizabeth McGrath is. Surely however, almost everyone is familiar with Spurlock’s gag-inducing, 30-day McExperiment. (Big spoiler for those unenlightened: eating only fast food every day of the month does not bode well.)

As Spurlock’s mainstream appeal brings attention to the more overlooked world of art, well-known artists put the spotlight on unfamiliar ones. There is a reason why “starving” often precedes the word artist, and if help from more established names is what takes to feed those eager, creative fledglings, then so be it. The product of Spurlock’s effort is a visual feast of diverse selections. A work of an established artist is juxtaposed with his/her respective protégé.

Be warned: this isn’t your 8th grade class field trip to the museum. These pieces stimulate shock, inspire awe and even produce some chuckles. The subjects are familiar, but the methods are experimental. This isn’t only the art of now, but also, if you really want to hear something banal but true, this is the art of the future. Little notes by the works give glimpses to the relationships between the artists involved. Nicholas Bowery, lead assistant to Shepard Fairey, famous for his Barack Obama “Hope” poster, says this of Spurlock and his boss:

I’m incredibly privileged to be in the presence of such great company. Morgan’s concept of the show is as brilliant as he. The show simply re-illustrates the importance of the artist/apprentice relationship and tradition behind it. About four years ago, I received the opportunity to work with Shepard and through a short time, I’ve learned a lifetime’s worth. You become extremely close when you’re holding your boss by the belt loop as he dangles over a building’s edge or billboard. The experiences I’ve had with him prove that Shep is hands down, one of the hardest working artists in the game… his commitment and drive truly has been non-stop since ’89. Take his “art side” away and you have a man who is truly passionate in his beliefs and compassionate in his fellow man… he lives to never regret and always rises above. I am forever appreciative to be a friend of an artist who will soon be plastered upon the history books.

These snippets articulate the abstract, providing little voices in your head convincing you that, maybe the power of celebrity isn’t so bad after all.