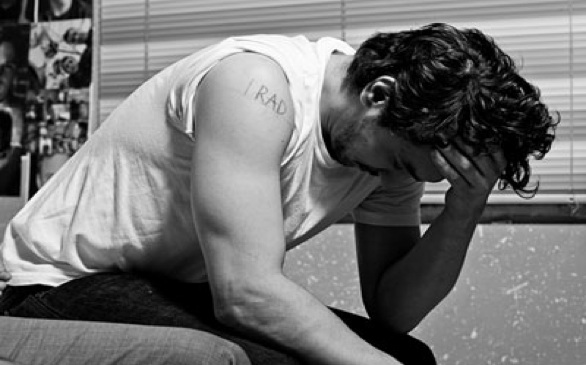 There are many, many labels you can ascribe to James Franco, but slacker sure can’t be one of them. The perpetual overachiever yet again adds another line to his resume (which, for those who aren’t as keen to follow his diverse career, currently boasts actor, film director, multiple-degree-holder, author and drag queen amongst others).

Saturday morning, May 12, Franco showcased his curating abilities to a diverse group of media members and presented “Rebel,” an homage to Nicholas Ray’s Rebel Without a Cause (1955) starring James Dean. The exhibit, currently on display at the Museum of Contemporary Art in Los Angeles, parades a collection of short films, photography and other various art works from the likes of well-known creatives such as Ed Ruscha, Harmony Korine, Paul McCarthy, Aaron Young and Terry Richardson. Of course, a James Franco production would not be complete without a few (okay, almost all) creations by the mastermind himself.

Simply put, “Rebel” is a trip –less down memory lane, more down an Alice in Wonderland-like rabbit hole. The assembly of artists brought together by Franco sought to translate the image Dean indelibly created in the iconic film, an immortal persona of youth and masculinity. The auto and motorcycle culture of the 1950s isn’t ignored either, with literal and symbolic installations through out the exhibit, one of which is Young’s large-scale sculpture of a 1950 Ford Custom Tudor Coup, the car model that killed Dean –a slightly morbid but nonetheless grand welcome to MOCA visitors about to be immersed in Franco’s own brand of wonderland.

There are plenty of short films throughout, one of the more memorable ones being Caput by renegade filmmaker and director Harmony Korine. His artistic adaptation of a famous scene from Rebel Without a Cause stars Franco, and involves machetes and a female BMX riding gang to depict the tensely choreographed scene famously filmed outside the Griffith Observatory.

Photography is also well represented through Terry Richardson, famous for his use of a stark white background as a backdrop to his sexualized portraits of celebrities. He is responsible for the now famous images of Franco in drag, which are on display in the exhibit as well.

Past the short films, photographs and larger-than-life installations, the journey ends with two poignant four-part self-portraits of Dean, titled "Self Portrait of You + Me and Me + You + You + Me + Me + You 01 and 02." Assembled by Douglas Gordon using smoke and mirrors, this quiet section of the exhibit is the barest depiction of the young actor, a perfect ending to the visceral, in-your-face adventure that Franco and his artistic friends offer to the contemporary James Dean fan.