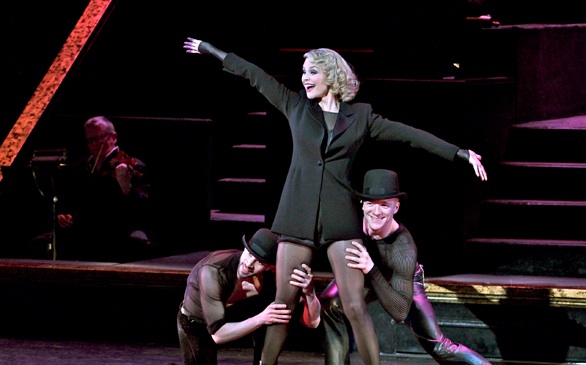 Enter Chicago, a city where murder is simply a form of entertainment.

The musical opens on famed performer Velma Kelly’s last show before being jailed for the murder of her sister and husband. Velma, portrayed magnificently by Amra-Faye Wright, sings one of the musical’s best numbers: “All That Jazz.” On the same night, our protagonist of sorts, named Roxie Hart, kills her boyfriend. Her husband Amos fails to take the blame for the murder after realizing that the man was not a burglar, as Roxie had originally told him. So, the police arrest her and transport her to the Cook County Jail.

Once there, the audience is introduced to the “six merry murderesses” of the jail, including our very own Velma Kelly. Unfortunately for her, once the press gets word that Roxie has killed her boyfriend, the spotlight shifts. Both women had planned on using their murderous rampages as a way to gain fame and fortune, but now it seems that Velma’s 15 minutes of fame are over.

Roxie enlists the help of Billy Flynn, a defense attorney who has never lost a case. Although he claims that all he cares about is love, his $5,000 fee would suggest otherwise. Roxie somehow convinces Amos that he should pay the money that Mr. Flynn is charging for his services. Now that Roxie has her attorney and her fame, all seems to be going well for her; even Velma Kelly is begging her to do a double act! However, when a feisty heiress kills her boyfriend and his three lovers, the press are no longer interested in Roxie’s story. To add to her dismay, one of the merry murderesses was hanged for her crimes. Can Roxie escape hanging? And more importantly, how can she attract the attention of the press again?

“Chicago” is a well-established play, so when one buys a ticket to a professional production of said play at a theater like Pantages, they expect only the best. It seems that perhaps the best was unavailable. The musical was quite entertaining, but there was one major problem: Christie Brinkley is not a singer –not by a long shot. Furthermore, she’s not exactly an actress either. She was not horrible by any means, and did seem to get slightly better in Act 2, but the word that would best describe her performance as Roxie Hart would probably be “dull.” There was no excitement, no liveliness, in anything she did.

That being said, the majority of the cast was excellent. It is a tragedy that people with such talent like Amra-Faye Wright (Velma Kelly), Carol Woods (Matron “Mama” Morton) and Ron Orbach (Amos) are overshadowed because big name celebrities step into roles that they simply do not have the talent to portray. Even more shocking is the fact that Brinkley has played the role on Broadway and in London. How she managed to get such high-profile theater gigs is beyond me.

All in all, “Chicago” at Pantages is still entertaining; it just becomes difficult to look past a major lack of theatrical talent from the main character of the show. If you’d like to see the show with big name stars that have plenty of talent, I’d suggest renting the movie version.