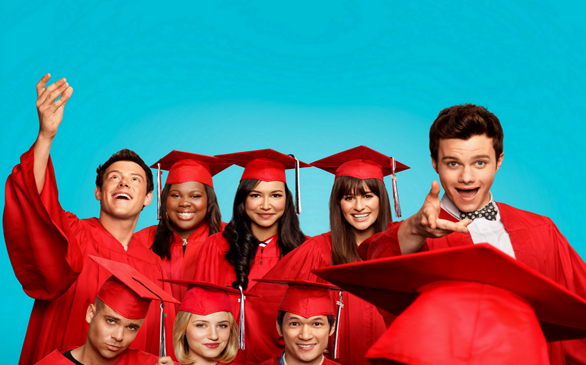 “Glee” is back with another compilation album, and this time, it’s graduation-themed. For anyone who follows the show, you know that many of the main characters are set to graduate in the upcoming season finale –but not before they sing as many songs as they possibly can!

Beginning the album is the “Glee” rendition of “We Are Young.” The song is from earlier in the third season of the show, but it seems to fit well on The Graduation Album. The track isn’t among the best of the show’s covers, but it certainly gave the original track a boost on iTunes and the radio. Next up is “Edge of Glory,” a Lady Gaga cover, which is undoubtedly one of the highlights of the album.

Lea Michele’s performance of “I Won’t Give Up” is another highlight. That’s no surprise, considering she has the best voice on the show; almost every song she has performed for “Glee” is a true delight to listen to.

The entire cast performs “We Are The Champions,” which they sing during an emotional moment to celebrate their win of the national show choir competition. The track does not exactly stand out, however, nor does “School’s Out,” performed by Mark Salling. They are fun tracks, but nothing memorable.

“I Was Here” is perhaps the best track on the album, and it comes as no surprise that Lea Michele is the person singing it. Although the graduation episode has not yet aired, it seems as though it is her character’s reflection on her high school years as graduation approaches.

“Roots Before Branches” and “Glory Days” are okay, but nothing to write home about –which holds true for much of this album. “Forever Young” is another track that I would not have even included on the show or the album. Matthew Morrison is unlikable on and off of “Glee,” and he didn’t really need another solo. It was bad enough when he joined the kids in their rendition of “Toxic” by Britney Spears in season two.

Perhaps the most fitting song of the entire album is “Good Riddance (Time of Your Life).” It goes well with the graduation theme, and the performance is great; it sets the tone for the season finale.

Glee: The Music, Season Three – The Graduation Album is another typical “Glee” release. Many of the songs in season three have been disappointing, and many just unnecessary; but there are some outstanding songs on this album. For those who follow “Glee,” the album serves as a bittersweet reminder of how far the show and its characters have come in the last three years.