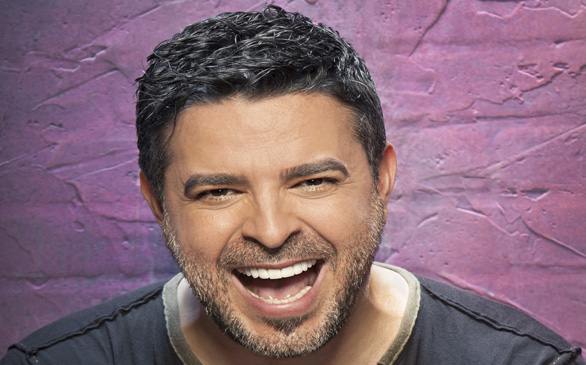 Salsa singer Luis Enrique is one of the highlights at this year's L.A. Salsa Congress.
(Credit: Omar Cruz)

“An incredible amount of culture and diversity will be coming into the city from 35 different countries, all with a common denominator of love of Latin music, dance and live music,” L.A. Salsa Congress President and Producer Albert Torres says. “They [will] bring an international flavor to Los Angeles.”

This year’s festivities include three days of live music, workshops, performances and a lot of dancing, of course. Each night is expected to be a blowout of fun and entertainment, with the attendance marks expected to reach over 3,000 fans per night.

Known as the most respected salsa event in the world, the L.A. Salsa Congress includes three different generations of tropical music greats. At one point or another, D’Leon, Enrique and El Gran Combo all have won Grammys, and each carries a rather popular musical catalog deriving from their experiences and their cultural roots, coming from Venezuela, Nicaragua and Puerto Rico, respectively.

“[Luis Enrique and El Gran Combo] are artists with big careers,” D’Leon states. “It is a unique achievement to share the stage with them.”

The much-awaited event begins Thursday, May 24, at L.A. Live’s Conga Room, with a very unique and special performance from the classic salsa orchestra New Swing Sextet, who are based in New York. Local salsa act Johnny Polanco and his band, along with Jenny Colon, are the opening acts. Doors open at 8 p.m.

“Locally, Johnny Polanco carries the best band I know of, and it is a great appetizer [for the rest of the event],” says Torres.

But that is not all. Known as the “Salsa Lion,” Oscar D’Leon highlights Friday night’s magical performance full of energy, charisma and his impeccable music tracks, such as the upbeat and highly recognizable “Lloraras” (You’ll Cry).

“I feel it is a grand responsibility to be a part of it,” D’Leon, a product of South America, says when asked about the significance of performing. “I have to do everything possible to deliver a good demonstration of love, affection and music, and I feel very proud of that.”

D’Leon’s inspirations have accumulated over the years, but he does mention Celia Cruz and Orquesta Aragón as prime contributors to his musical influences. As a kid he dreamed of becoming a professional baseball player, but music took over.

“When you talk about Oscar D’Leon, you are talking about the definite Salsa Lion,” Torres explains. “I don’t even think he wears a watch when he is on stage; he is just there for the public…he plays for the dancers.”

On Saturday, the workshops, dancing and live music will continue throughout the day, keeping with the theme of world and tropical music. The night, however, is set to include performances by the winners of the World Latin Dance Competition and some of the best dancers in the world. Several DJs, led by Super DJ Robby, will be spinning live sets, and Luis Enrique, also known as the “Salsa Prince,” will perform that night.

“For the first time in two years, we are bringing back someone who grew up here in L.A.,” Torres says of Enrique, who recently won two Grammys. “Commercially, we can bring someone like Enrique so that people can learn about the Congress.”

Hailing from Central America, Enrique brings a prolific voice and attitude to the stage, while providing a youthful touch to the weekend’s festivities. His “Yo No Se Mañana” (I Don’t Know Tomorrow) and “Date Un Chance” (Give Yourself A Chance) are both electrifying – demonstrating his capacity for romantic salsa and personal storytelling, respectively.

El Gran Combo will be closing out the weekend. To put it simply, this Rafael Ithier-led group is simply amazing. Proclaimed as the “Salsa University,” El Gran Combo has served as an ambassador for the genre, leading the way with their many hits such as “Arroz Con Habichuela” (Rice and Beans), “Me Liberé” (I Freed Myself), and “Brujeria” (Witchery). El Gran Combo is Puerto Rico’s most successful orchestra, and they have been performing practically nonstop since their inception.

During all nights, the public can take part in the club-like dancing scene, where several rooms will have various types of music playing after the main performances. A celebration of salsa, the L.A. Salsa Congress is really aiming to produce an incredible journey for people from beginning to end.

“I hope [L.A.] continues to support the event so that we can continue to celebrate it in style,” D’Leon shares. “Los Angeles is a region filled with Latinos, and that makes me feel right at home.”