Get Ready to Party Rock with LMFAO 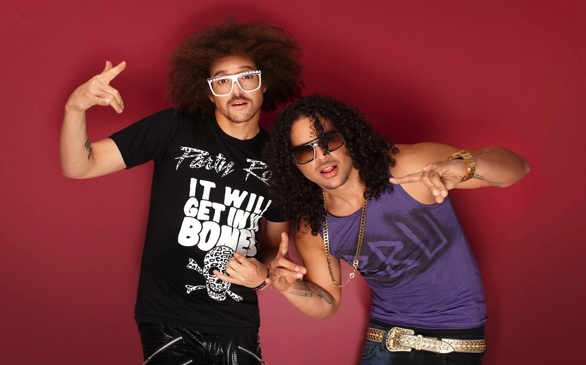 Redfoo and Sky Blu will be party rocking at the Staples Center on June 5.
(Credit: Interscope)

“It’s become like a traveling circus,” noted Redfoo, describing the upcoming LMFAO tour, which will be making a stop at L.A.’s Staples Center on June 5.

“This is the biggest tour we’ve done, and we’re just preparing to give the best experience that we can,” he added. “The main focus for us right now is to really give the fans what they expect and more.”

So what can fans expect?

“A lot of shuffling, a lot of what’s in the videos, and just some crazy energy!” said Redfoo.

The afro-sporting uncle/nephew duo has achieved great success with their sophomore release, Sorry for Party Rocking. The album is now certified gold, with two of its singles, “Party Rock Anthem” and “Sexy And I Know It,” reaching No. 1 on the charts.

However, their success did not come overnight.

“This is four and a half years of dreaming about these moments,” said Redfoo. “When you dream of something so much, it becomes a reality even before it becomes everyone else’s reality. We always felt like we were No. 1 before we got No. 1.”

Sky Blu echoed his sentiments. “This is a dream come true because we’ve been thinking about it for so long, and it just feels so good that we’ve reached the level of success that we’ve always dreamed about,” he said. “It’s amazing to see how many people you affect around the whole globe. It’s a beautiful thing.”

Perhaps the group’s success derives from their authenticity. As outlandish as their costumes, song lyrics and unabashed humor are, the duo explain that is their true selves.

“We created LMFAO from who we really were, and we just displayed that,” said Redfoo. “We’re funny people, we’re sexy, [we have] incredible packages, we like to rap, we like melodies, we like to sing, we like to make music, so we just said, ‘Let’s do all of that stuff and entertain the world and make people happy.’”

“We were always sexy and we knew it; it was really just explaining what was going on in our mind,” he continued. “It’s a mindset.”

LMFAO is attempting to bring people into that mindset with the eccentric costumes and various stage props they will use on the tour.

“The concept and attitude really is a world, [and we use] anything that can show the world – an inflatable palm tree, a shuffling zebra – that can make you feel like you’re in a dream,” explained Redfoo.

Audiences should come prepared with their best Party Rock gear, lens-less sunglasses –and an umbrella, for “Champagne Showers” of course. The two agreed it’s their favorite song to perform live.

“‘Champagne Showers’ is just really exciting,” said Redfoo. “It comes at a point in the show [that’s] like the climax. It’s definitely one of the best moments in the show.”

“I love that song so much,” added Sky Blu. “The energy of it is unreal; it’s almost spiritual.”

The tour kicks off May 22 in Columbus, OH, and while the duo is excited to travel around the country, they are especially looking forward to playing the Los Angeles show.

“That’s our hometown, so the Staples Center is very exciting to us because you see all your family, and that’s just a big deal because we’ve been going to the games – the Lakers games, the Kings games – and all the events [there], so to do that [show] is going to be amazing,” said Redfoo.

“Sometimes we have a couple of shots [before the show],” said Redfoo. “We might do some push-ups; Sky Blu might be doing some pilates.”

The two like to follow their performances with a locker room-like recap of what was happening on stage.

“We discuss the show –all the things we were thinking, things we want to keep and not keep,” explained Redfoo. “Then it’s right to the party baby! If there’s any champagne left, we break that out and just continue partying!”

The tour features special guests Far East Movement, the Quest Crew, Sidney Samson, Eva Simons and Natalia Kills –and Redfoo is hoping for a couple of other guests to join as well.

“Lil Jon might come in here and there if schedules permit,” he explained. “If Obama wants to come out and wiggle, have our people talk to his people. Let’s get it started!”

While their main focus right now is the upcoming tour and there are no set plans for a new single or album, the two are constantly coming up with new material.

“We’re always working on new ideas,” said Redfoo. “We have to –just making stuff and expressing ourselves in a musical way.”

Sky Blu explained that their music is continuously evolving as a result of the people they have been fortunate enough to meet throughout their careers.

“In the beginning, we were just listening to music and figuring things out, but now we know David Guetta, we know Afrojack, so it’s just your conversation and all that,” he explained. “It stimulates a new sound or a new concept, and then we take it and do it our own way, and so that just evolves the music.”

The group is also considering making an LMFAO movie.

“We’ve got some stuff up our sleeves now,” confessed Sky Blu. “We can’t give it all away, but that’s something we’ve been thinking about.”

“I think a movie is an amazing thing because it’s really a world, just for an hour and a half,” added Redfoo. “That actually may be too much for the world. It might change movies; people might start dancing and shuffling in the theaters.”

For now, you can shuffle at the Staples Center when LMFAO comes to town this summer.

For more information about the tour and to purchase tickets, visit ticketmaster.com or livenation.com.