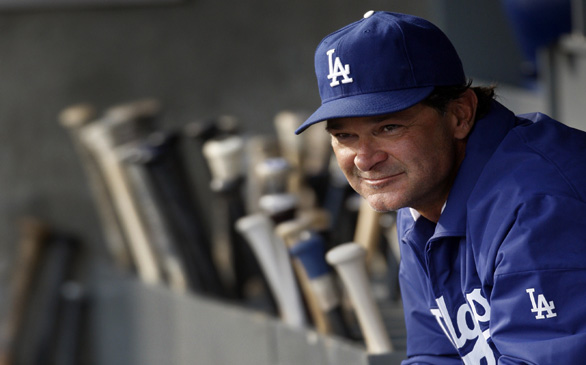 That was the first question Don Mattingly was asked in the pre-game interview last Saturday when the Dodger manager emerged from the clubhouse.

“Not so hot,” he replied, settling into his spot on the dugout bench.

“What happened? You got fired?,” replied the reporter chuckling.

It was soon revealed that the news on second baseman Mark Ellis was not good. After being spiked in the left leg the night before by a sliding base runner, Ellis had come in to work with severe swelling. The situation called for an emergency medical procedure known as a fasciotomy, usually performed on victims of car crashes. The procedure requires cutting open the skin and leaving a wound open for a number of days to relieve swelling. Mattingly was clearly disturbed, and went out of his way to praise Ellis.

“I think he’s a great player; one of the guys that the more you see, the better you like.”

Ellis is the latest in a growing list of injured Dodgers, which has butchered their opening day lineup. The infield has suffered the recent loss of Juan Uribe and Jerry Hairston, while the outfield is missing Matt Kemp and Juan Rivera. Kemp is due back May 29, not a day too soon as far as the offense is concerned.

And yet for a team with so many wounded soldiers, the Dodgers are playing surprisingly excellent baseball –and they have the best record in baseball to prove it. What’s more, they have played with remarkable variation in starting lineups. During the first 40 games of the season, the Dodgers have had 30 different starting lineups. Mattingly, the man responsible for penciling in those lineups, seems wholly unconcerned about the lack of consistency.

“I don’t care what line-up we have, I feel like we’re going to win.”

Perhaps what is most astonishing is the casualness with which Mattingly expresses confidence in the team. His attitude towards his players is one of respect and concern.

“’Just do your thing,’ that’s what I tell them. I don’t want them trying to do too much. If everybody just does their thing, we’re going to be alright.”

The Mattingly who espouses such cool confidence in his team has shown himself to be a tough competitor when the game starts. Last week alone, he got himself tossed out of two games for arguing with home base umpires. Quite the change for a guy accused of being too mild-mannered last season. He also has shown himself getting noticeably excited when his players come up with big hits or good plays.

“Donnie’s a player’s dream,” said catcher A.J. Ellis. “His confidence trickles down to us. He expects a lot out of us, but he understands how hard this game is and you know he cares.”

The 31-year-old is in his first season as the Dodgers' starting catcher. He has surprised almost everybody by posting a .330 average in the first quarter, and ranking second in the league in throwing out base-stealers.

“It’s a great time to be a Dodger,” he said. “With the change of ownership and having Donnie, there’s a buzz in the clubhouse and it feels good.”

Kershaw, who improved his record to 4-1 and ERA to 1.90, was pretty awesome himself as he led his team to victory by a score of 6-0. The Dodgers would eventually sweep the defending champs.

From the point of view of Dodger fans, seeing the team play so well after two mediocre seasons and despite so many setbacks is…well, awesome. How long it can last remains to be seen, especially when one is never sure exactly who will be playing what position on the field. Last week Andre Ethier was seen playing centerfield in the absence of Matt Kemp. Yet for all the inconsistency on the field, the pitching has been remarkably solid and free of injury. (Fingers crossed it stays that way.)

While nature takes its course in healing the injured players, the Dodgers must continue to “do their thing,” as Mattingly would say, which appears to be winning ballgames. Perhaps if they keep this up, the fans will start coming back to the old ballpark.