Will Smith is Back in Black 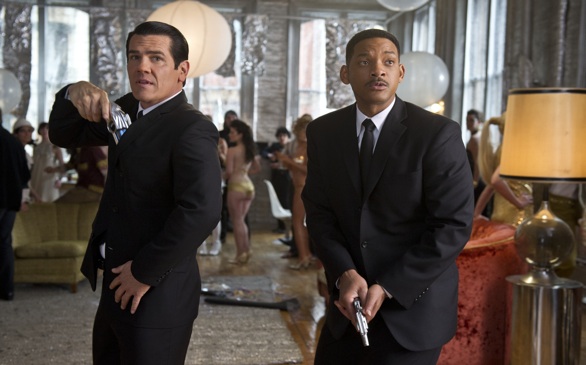 Yes, he took a break from appearing on the big screen, but he really does look better than ever. Funny. Solid. Attractive. Charismatic. In reality, he may be the best there is right now when it comes to acting.

This is Will Smith, who is back for the third installment of Men In Black, a series of science-fiction comedy films directed by Barry Sonnenfeld (Get Shorty, RV), also starring acclaimed actor Tommy Lee Jones (The Fugitive, The Missing, Volcano, In the Valley of Elah).

Originally based on the Men In Black comic book series by Lowell Cunningham, the MIB flicks have redefined the genres of sci-fi, action and comedy.

“Ecstatic,” was how he described his feelings about revisiting the film franchise.

The actor, as always, delivers an impeccable performance. This time, he is even funnier, more active, and he provides a spark in emotions due to the film’s dramatic twists.

Jones is back in his role of Agent K, who originally recruited Agent J (Smith) to the Men In Black organization, responsible for keeping an eye on aliens inhabiting the U.S.

In MIB3, there are more of the same elements we loved from the first two movies, yet it targets a younger generation, as well as older fans, with its “fresher imagination,” according to Jones. Perhaps as part of the film’s desire to appeal to a more youthful audience, we see less of Jones in the flick, and more of a younger version of Agent K played by Josh Brolin.

Jones gave Brolin’s portrayal of the character his stamp of approval. “I have only seen the movie in the form of a rough print, but he seems to have done a fine job,” he says.

Sonnenfeld describes how they interplayed the two versions of Agent K: “We shot the acts sequentially. We had Tommy playing K in the first act, then Josh came in playing K for the second act and almost all of the third act, and then in the last week of shooting, we got Tommy back. What I found amazing was that I kept thinking I was directing one actor; the performances were so consistent that it was hard for me to tell where Tommy Lee Jones ended and Josh Brolin began. For me, it’s not about Tommy playing K or Josh playing K. It’s just K.”

In this installation of the Men In Black films, the characters travel back in time –and it is truly epic. Perhaps this idea came about because of all the pressure to come up with a unique concept for the film after part two did not do as well as the first. In a sense, the filmmakers for this particular segment decided to reinvent the franchise.

However, according to Smith, all of the movies are about the same thing at their core: the relationship between J and K. In this case, J has two relationships within one, since he travels back in time to the 1960s, where he encounters a much younger K.

“This movie is about the power and origin of their relationship,” says Smith. “It’s actually an idea we’ve had for years – we had the concept before the second movie – but it needed time to mature. What we had to do was elevate the story, and the only way to do that is to go deeper into the character, deeper into the revelations that the movie would reveal.”

Playing Agent J has been one of Smith’s favorite roles of all time.

“You can’t beat the black suit,” he says. “It’s such powerful, iconic imagery.”

Smith’s determination to put back on the suit was a big factor in getting the movie made. In the beginning, Sony Pictures had trouble completing a script; Sonnenfeld kept asking for one, and Smith was his biggest supporter in the situation. In the end, everything came out well, and the original chemistry from the first two films was restored.

“We got along great – Will, Tommy, Brolin and myself,” Sonnenfeld says. “This was a situation where the actors totally trusted the director [and] the director loves the actors.”

Seeing Men In Black back on the big screen is exciting as is –but the best thing about MIB3 is that it’s in 3D. With this feature, the plot totally envelops you and you feel like you are a part of the storyline throughout: You are in space. Out of this world. MIB3 allows you to leave your real world worries behind, and it definitely has you enjoying a marvelous piece of cinematic entertainment.

Men In Black 3 is the best one yet, and it is 2012’s most anticipated film to watch, particularly in 3D. It will leave you wanting and expecting more –so let’s hope there’s a fourth in the works.