Willa Ford Returns to the Spotlight in Starz's "Magic City" 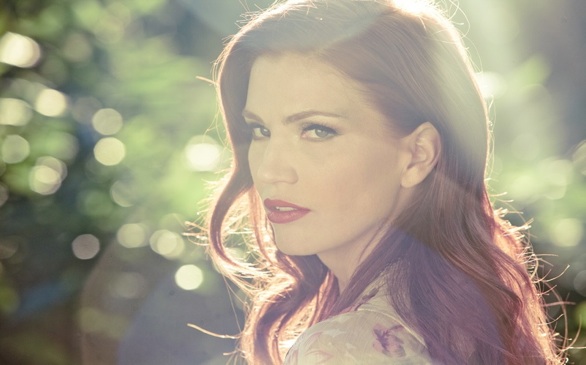 You may remember Willa Ford as the sexy blonde singer who belted out the hit “I Wanna Be Bad” back in 2001 –well she’s back, and she may not be blonde anymore, but her latest endeavor is as sexy as ever.

The now 31-year-old plays Janice Michaels in the Starz Network original series “Magic City,” which has been receiving critical acclaim.

She certainly made a memorable impression with her entrance on the show, appearing in the pilot in a rather compromising position –let’s just say she’s in the passenger seat of a vehicle doing something rather naughty to the driver.

Yet, Ford – who is married to retired NHL player Mike Modano – seems unfazed by the racy nature of her role, which has included nudity in other episodes.

The series takes place in 1959 Miami Beach, when Havana has just come under Castro’s control. The show exposes the seedy underbelly hidden beneath the flashy and glamorous exterior of one of Miami’s elite families, who run the high-end Miramar Playa hotel.

Janice first appears as one of the hotelier’s son’s many lovers, but her role has been changing and expanding as the series goes on.

“It started as a really quick character, and they started twisting and turning her more into the drama that’s happening,” says Ford. “We don’t know a lot about her yet, but she is a wild, red-headed child that still has a conscience, but doesn’t really apologize for much.”

Ford has had the opportunity to work along with the show’s creator, Mitch Glazer, to further develop her character.

“It’s very important to find the character and where they’re coming from: who is she, what’s happened in her life to make her like this, what’s her job, does she have a job, is she rich, is she poor? All these decisions have to be made,” she explains. “It’s fun creating a character that’s still sort of evolving.”

It seems only fitting that a woman who burst on the scene singing about how she wanted to be a bad girl is now playing one on TV.

“I think her lack of filter is fun,” she admits. “It’s fun to see where she’s going to go next, because she could just as quickly do something that’s going to get her killed as something that could [help her] work her way to the top.”

A native of Florida – the setting for the show – Ford knew immediately that this was a project she wanted to be involved in.

“I obviously missed that entire era, but this is stuff my mom and grandparents remember really well,” she explained. “Back then it was so dirty money and everybody got away with everything.”

Glazer seemed intent on having her be a part of it as well. She was cast, and a week later she was flown to Miami to meet with him.

“He was like, ‘You’re beautiful, I loved your tape, we’re dying your hair red,’” she said of their initial meeting. “I was like, holy crap, that’s a big move right there!”

Ford said that when she first dyed her hair the bold hue, some found her to be unrecognizable.

“People who have known me for years have no clue who I am sometimes, it takes a minute before realizing it’s me!”

However, she is fully embracing her new look.

“Overall, people told me to keep it,” she said. “I think this color works for me; I think I’m going to keep it for a while.”

So does the newly redheaded beauty have any plans to make a musical comeback?

“I absolutely do, but I don’t know in what venue,” she explains. “I don’t know if I want to go to this place where I’m playing to 40,000 people again. I really love creating music, and so I feel like I’m going to slowly create, and feel it out and see where my heart wants to go when it comes to music.”

Whatever path her music takes, Ford is sure that what she comes out with will have more of an emphasis on her vocal ability than the pop-dance hits she was known for during the era of Britney Spears and boy bands.

“I feel sad sometimes when people think that every pop artist that came out [during that time] couldn’t sing, because some of us were really good singers,” she laments. “I’d want to do something to really showcase that, rather than just dancing around.”

While her return to the music charts is still in the works, in the meantime, you can catch Ford Friday nights at 10 p.m. on Starz’s “Magic City.”