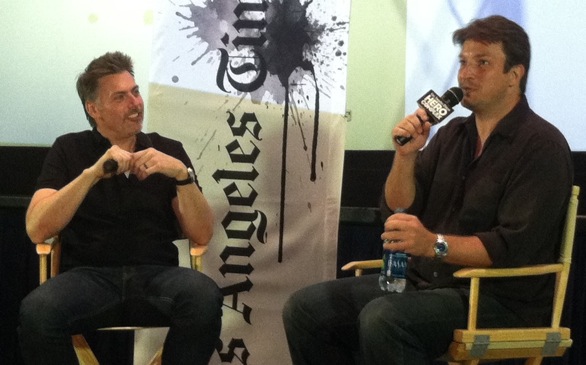 Over the weekend, The Los Angeles Times Hero Complex presented its third annual film festival, hosted by resident film-geek Geoff Boucher, who served as a fantastic curator between audience and filmmakers. For this year’s fest, cinephiles got a great selection of classic and new favorites.

On the first night of the festival, attendees were treated to a zombie double-feature of Zack Snyder’s Dawn of the Dead and Edgar Wright’s Shaun of the Dead, with spliced highlight footage of last season’s “Walking Dead.”

After Dawn of the Dead, director Zack Snyder and writer of the “Walking Dead” Robert Kirkman sat down to discuss their contributions to the genre. Both projects started around the same time, and Snyder recalled the initial backlash from fans of George Romero, known as the "Godfather of all Zombies;" the director of the original zombie films himself claimed to want to fight the man remaking his baby. When asked which fans were harder on him, zombie fans or Watchmen fans, Snyder replied: “Zombie fans for sure, 100 percent!”

While Kirkman jokingly would refer to the Superman project, stating that he was only really there to find out what was on everyone’s mind, Snyder played it cool and remained tight-lipped. In turn, the Man of Steel director praised Kirkman’s work on the “Walking Dead,” and admitted that he was an avid viewer of the show.

Later that night, day one of the fest closed with a second Q&A session with Edgar Wright, crashed by none other than Shaun himself, Simon Pegg.

The duo talked about their long working relationship and friendship, which will hit a milestone in the form of the third film in the “Blood and Ice Cream” trilogy, The World’s End.

Pegg noted that The World’s End doesn’t necessarily mean that he will stop working with Wright: “I want to work with Nick [Frost], Edgar [Wright] and Nira [Park] until I can’t walk anymore, and then maybe do one in a wheelchair. Maybe the next one will be a one-off.”

He feels Shaun, Hot Fuzz and The World’s End is a trilogy in the sense that they encapsulate the theme they have been working with since the first film: as Pegg put it, “the struggle of the individual against the collective.”

Day Two: A Robo-Cop, a Droog and a Vigilante

The second day kicked off with a sermon of sorts by Robo-Cop himself, Peter Weller, who took over the session to give the audience an impassioned lesson about the arts, which had little to do with the movie he was there to present. Definitely one of the most bizarre interview moments, but oddly spectacular.

Rick Baker, beloved practical effects magician, was able to come and talk about his work after Weller’s hour-long class. He discussed adapting into a world where digital effects were becoming more prevalent, and brought along a beautifully detailed head of an alien used in MIB3. The details on it were very realistic, and proved that there is still a need for practical effects in film to bring life to designs computer-generated creation cannot.

On hand to introduce A Clockwork Orange was star of the film, Malcolm McDowell, who just came back from touring for the 40th anniversary of the Kubrick classic. McDowell discussed his legacy, never tiring of recalling tales about the making of Clockwork, but noting that he generally skips out of the movie except for one time when he was locked into the screening! This Q&A was definitely one of the most real and hilarious sessions of the festival, full of stories from throughout McDowell’s life, including his run-in with Gene Kelly: “He turned and looked and me and walked away; I destroyed his moment," he said, in reference to his use of Kelly's classic "Singin' in the Rain" during a disturbing scene in Clockwork. "I poached and stole one of the great moments, turned it on its ass, used it in a rape, and it's one of the funniest fucking things I’ll ever do.”

Rainn Wilson and James Gunn, director of the film Super, which closed out the second night, sat down to talk about the underrated Average Joe-turned-hero vigilante tale. Gunn, who’s friends with Mark Millar (creator of Kick-Ass), discussed how both ideas were born coincidentally around the same time, and that there weren’t any hard feelings because in a creative industry, similar character arcs happen all the time. Both tales do present the brutal reality of what people attempting to don hero personas might go through, yet each retain their own unique take on the individual fighting to impart some justice in the world.

Day Three: A Little Trip to Outer Space with Wall-E and Captain Mal

Due to Stan Lee’s personal loss, the final night of the festival was switched from Monday to Sunday, but the fest did close with two very special guests.

The second-to-last film presented was Wall-E, and in attendance was director Andrew Stanton. He discussed the making of the movie, as well as the fact that the current generation of movie-goers have begun to abandon the idea of labeling animated movies as kids' movies. “Animation is a medium, not a genre,” he said. “We [Pixar] are making movies we want to see.”

In the house that night were many fans of Stanton’s John Carter. When he thanked the “Barsoom” crowd, the place went wild with support.

Joss Whedon’s Serenity was the final film of the 2012 film fest, and on hand to talk about the movie was none other than Captain Mal himself, Nathan Fillion. Much of the Q&A was taken up by talk about the man behind the film, whose storytelling abilities have now reached a wider audience with The Avengers. Fillion described Whedon: “I don’t know if any of you guys have one of these friends that’s always cool; this person at the center of the hub, where everyone around them is amazing. That’s Joss.” With The Avengers, Whedon now has more resources to make more amazing things with his friends. Browncoats (Serenity fans) shouted from the crowd, “Serenity 2!,” which Fillion said he would love to do.

For more in depth coverage and videos, check out herocomplex.latimes.com/category/movies/.