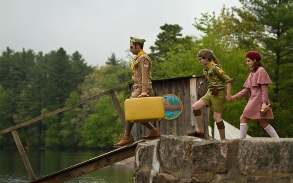 It could easily be said, at least according to Wikipedia, that Wes Anderson has a pretty predictable filmmaking recipe: write a charming story about flawed, yet sartorially impeccable characters, pepper in some dry humor, play folk music in the background, see what Bill Murray is up to these days, and execute it all with primary colors.

In an industry where the next big thing isn’t as good enough as the next, tradition is quickly losing value. Yet the director’s reputation for an unchanging aesthetic still excites many moviegoers like no other. Sure, he is a loved filmmaker who has provided us with endless Halloween costume ideas, but through all these years, really, why do we need to see another Wes Anderson film? Moonrise Kingdom answers that with its greatness.

Moonrise Kingdom is what you expect it to be (see above generalization): It’s an adolescent love story set in 1965 New England. Now that might already cause many a tooth to ache, but where Anderson gets it really right is through newcomers Jared Gilman and Kara Hayward. Although Hayward’s Suzy undeniably borrows from Margot Tenenbaum, the unique blend of sensitive and tough exclusive to youth is all her own. Gilman as the orphan Sam has a likability that isn’t direct, but a process to digest throughout the film. Their chemistry is awkward (in a realistic, adorable way) and organic –Anderson made sure of it.

Hayward discloses, “Wes had Jared and I write letters to each other because in the story, Sam and Suzy write letters for a year to each other after they meet.” The young actors originally corresponded through e-mail, but Anderson insisted that it wasn’t authentic enough. “He wanted the letters,” Hayward adds.

The rest of the dream cast, consisting of Bruce Willis, Edward Norton, Frances McDormand, Jason Schwartzman, Bob Balaban and of course, Bill Murray, was indeed a dream. It’s an ensemble that no other director could have gathered together –but you knew that already.

Moonrise Kingdom doesn’t try to reinvent the wheel, but it does conjure what is good, simple and sweet. It sure beats what any latest green screen, 3D concoction everyone else has going on these days.