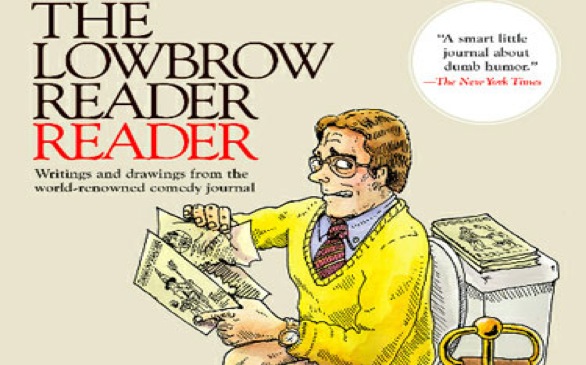 Let’s face it, there are times when you need to spend a little more time in the bathroom than you’ve anticipated –or a lot more time. In these situations, it’s always a good idea to have something like The Lowbrow Reader Reader available to distract you from, shall we say, the business at hand.

“Bathroom readers” are the kind of books that you can just flip open anywhere and start reading, usually composed of short chapters dedicated to quirky subjects. This one, compiled from stuff that’s appeared in the New York comedy journal The Lowbrow Reader, is full of adult humor, including a nasty roundtable discussion of oral sex techniques from comediennes Adele Givens, Miss Laura Hayes, Mo’Nique and Sommore, and a bit by Joan Rivers about how misguided her daughter Melissa was for refusing a men’s magazine’s offer of half a million dollars to pose nude.

Editor Jay Ruttenberg has penned much of the material himself, aiming his wit at the likes of Don Rickles and Gene Wilder, and in a team-up with illustrator Mike Reddy, a "Bang & Bop" comic about crossing paths with the White Stripes. Other contributors take on luminaries such as Lou Reed, Ol’ Dirty Bastard and The Three Stooges.

Despite all the off-color humor, the “lowbrow” part of the reader’s title is a little misleading; the essays and interview outtakes presented here are as much about savvy observation as they are about snark. If you do choose to take it into the bathroom with you, don’t forget to light a match.

Non-Fiction
Cindy Crawford talks 'Becoming' herself, being a mom and learning to love her mole
3,187 views

Non-Fiction
'Date Night In' a worthwhile cookbook for romance ... or not
2,347 views

Non-Fiction
What the presidents drank
2,236 views