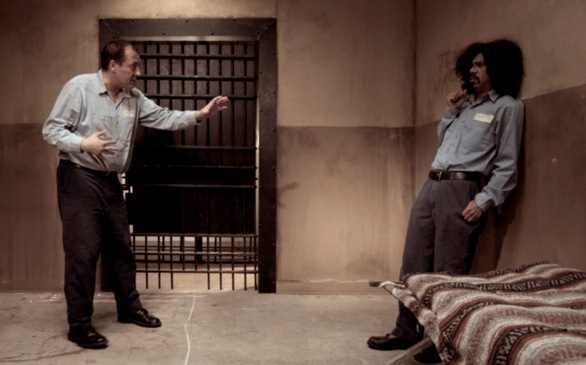 Cellmates is a movie that’s been made countless times before: A pair of completely dissimilar people forced by circumstance to share a similar space comically clash before finally becoming best of buddies. It's not that a reworking of this all-too-familiar material couldn't be made funny again, but it would take a lot more imagination than this Jesse Baget-directed project.

Starring Tom Sizemore as a hardened Ku Klux Klansman who ends up sharing a cell with a Mexican field laborer (played by Hector Jimenez), Cellmates is occasionally funny, but not occasionally enough.

Sizemore’s character Leroy has risen through the ranks to be crowned ‘Grand Dragon’ of the local Klan chapter. Unfortunately for him, the government has started cracking down on the organization’s activities, and it isn’t long before he is sent to the Low Lee Tuna Prison Work Farm to serve time. Worlds collide when the prison warden forces him to share a prison cell with an eccentric field laborer named Emilio (Jimenez) as part of his penitence. Not thrilled with the arrangement, Leroy sets out to make things very difficult for Emilio, but Emilio’s chatty disposition slowly chips away at his gruff exterior and an unlikely friendship develops.

What Baget has attempted with his buddy comedy is to tackle the subject of racism with a little humor, but the movie skimps on laughs. With pacing problems, it’s marginally entertaining one minute, and then brain-numbingly dull the next.

The movie's best scenes feature the two inmates simply razzing one another. At one point in the movie, Leroy draws a line down the middle of the prison cell and proclaims, “This side is the United States of America and that side is Mexico. I don’t go to Mexico, and you don’t come to America,” to which Emilio asks, “What happens if I want to use the toilet? It’s in the USA!”

This major problem with Cellmates is that there is no story arc to the film, nor is there much of a "story" to begin with. Sure, we follow the duo through their day-to-day work plowing in the prison farm, but not much really happens. Aside from a weekly meeting between Leroy and Warden Merville (played by a highly animated Stacy Keach), there is no interaction with the other prisoners (some of whom you see in the background, as the movie has five actors).

Sizemore does his best to ignite the proceedings with a stream of wisecracks, while Jimenez delivers an over-the-top performance. Comedian Kevin Farley makes a brief appearance in the role of Bubba McCarthy, Leroy‘s fellow Klansman, and Olga Segura rounds up the cast as the warden's Mexican maid whom Leroy develops feelings for.

This “mismatched males in a cell” movie may be well intentioned, but it’s just another uneventful script that contains little in the way of comedy or drama.