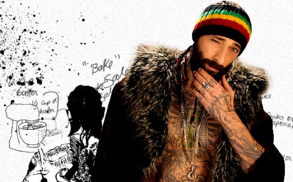 It’s a cookie-cutter, generic high school story starring Matt Bush (Piranha 3DD, One Last thing) as Henry, a straight-A student on the path to be the valedictorian, tempted to go astray right before graduation by stoner and one-time best friend Travis, played by Sean Marquette (13 Going on 30).

The antics begin after a comedic occurrence lands the two friends in detention, where Henry tries pot for the first time. Chaos ensues when Principal Gordon (played by Michael Chiklis of “The Shield” and Fantastic Four) wants to clean up his school’s tarnished image, starting by calling for a school-wide drug test. Henry and Travis decide to come up with a relatively brilliant plan to foil the drug test by getting the whole school high utilizing drug savant Psycho Ed’s (Adrian Brody) ultra-potent supply.

High School is a film that you feel like you have seen over and over, but its goofy approach engulfs you and you start to truly enjoy what you’re looking at on screen. However, it does have its own identity, separating it from the run-of-the-mill pure stoner films like How High, Harold & Kumar and Up in Smoke. The laughs happen early and often; it doesn’t rely on marijuana humor as a crutch, but embraces it while utilizing other types of humor into its impeccable comedic timing.

Brody is the real scene-stealer of the film, surprising audiences with his unorthodox comedic character, which he pulls off to a tee. He is reminiscent of Matthew McConaughey in Dazed & Confused, and he’s given plenty of space to go wild and provide a funny extra angle to the movie. Also providing a strong performance is Sean Marquette: This is a break-out role for him, and he proves that he’s grown up a lot from 13 going on 30.

High School is a must-see film, as many young adults and college students will find this a hidden gem you can watch over and over.