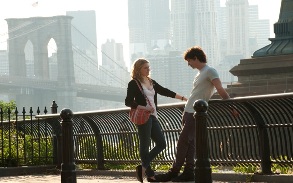 Such is the fate that befalls 29-year-old Manhattanite Lola, played charmingly by newcomer Greta Gerwig (Greenberg). With the help of her two best friends, Henry (Hamish Linklater) and Alice (Zoe Lister-Jones), Lola slowly but surely starts putting the pieces of her life back together.

Of course, the process is not without a few bumps in the road –and it’s these bumps that make her journey so real, relatable and entertaining to watch. From going out with the creepy guy she knows she should avoid, to sleeping with her ex-fiancé, to making a mess of her friendships, Lola does it all –but it’s these mistakes that lead to her self-evolution throughout the film.

“It did feel like a roller coaster ride every day,” said Gerwig of her character. “I felt like every day I was weeping and laughing and being nuts.”

Lola Versus comes from the writing team of Daryl Wein (who also directed the film) and Zoe Lister-Jones (who co-starred and executive produced as well), who are a real-life couple. They channeled some of their own personal experiences with their relationship into the movie, which Wein describes as a “romantic dramedy.”

Gerwig said that she knew she wanted to be involved in the film as soon as she read the script: “It was just a really great script; it was really funny and just very unexpected, and as an actress, I never see stuff like this.”

While the story is superb on its own, with its perfect mix of quirkiness, humor and human emotion, it’s the casting that truly brings the film to life. Gerwig shines in her first lead role, playing Lola in a way that any single 20-something woman will see a piece of herself in. Linklater and Lister-Jones both provide strong performances in their roles as Lola’s best friends, with Linklater perfectly cast as that “safe” guy friend you always kind of had a crush on, and Lister-Jones as the riotously funny neurotic best friend and confidante.

Perhaps playing the most complicated role is Joel Kinnaman (Easy Money, The Girl with the Dragon Tattoo), who portrays Lola’s ex-fiance Luke, who isn’t quite out of the picture. You want to hate him for breaking Lola’s heart, but his character has a sweet side that can’t be ignored.

“It was important for me and Daryl as writers to make him more three-dimensional than just the villain, and that was definitely a challenge because he does something that is easily perceived as villainous,” explains Lister-Jones. “And he’s so great, and so handsome, that who could hate him?”

With its combination of excellent acting, writing and directing, Lola Versus tells the story of what happens when your whole world turns upside down, and does so with a lot of heart and wit. We learn that though this abrupt change can be jarring at first, you sometimes find out that it’s what you needed all along.